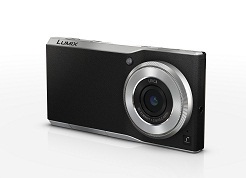 Panasonic unveiled a smartphone/camera mix in a similar vein to Samsung’s Galaxy K Zoom, upping the specs further with what is claimed to be “the world’s largest image sensor ever in a phone”. But there are caveats.

The Lumix Smart Camera CM1 will be “initially available in limited quantities” from November, at a pricey €899. And geographic availability will also be limited.

The device uses the same image sensor used in the company’s Lumix FZ1000, which it describes as “the top model of the bridge class”. Its 1-inch high-sensitivity MOS sensor enables high-quality photos in low-light conditions, a “basic problem” of smartphone photography.

Other imaging credentials include a resolution of 20MP and a Leica lens that provides “excellent resolution, minimal distortion and little light fall off at the edges”. It also has its own processor that is optimised for photography tasks, taking the burden from the smartphone processor.

In terms of the smartphone element, it has a 4.7-inch full HD display, and is powered by a 2.3GHz quadcore Qualcomm processor. It has 16GB of built-in memory and a MicroSDXC card slot, providing expansion of up to 128GB.

Also onboard is LTE connectivity, as well as Bluetooth, WiFi and NFC.