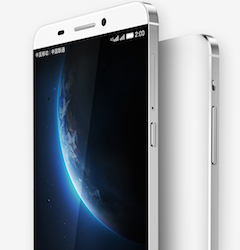 The custom Android models – which the company calls Le Superphones – are designed to deliver Letv’s streaming video. All three are bezel-less, have dual-SIM slots and feature the new USB (Type C) reversible socket.

The flagship Le Max is equipped with a Sharp 6.3-inch 2K display, Qualcomm Snapdragon 810 CPU and Sony 6P spherical lens with F2.0 ultra-large aperture. It won’t be available until June and no retail price has been given.

Le 1 has a 5.5-inch display, MediaTek Helio X10 CPU, 13-megapixel rear camera and a 5-megapixel front-facing camera. The 1 Pro features a 5.5-inch 2K display from Sharp and a Snapdragon 810 processor.

The company, which also creates its own video content, aims to sell more than one million units this year and expand that to 10 million units next year, DigiTimes reported.

It said Taiwan’s Pegatron will make the Max and 1 Pro, while Compal Electronics will produce the Le 1.

Letv (or Leshi TV) CEO and founder, Jia Yueting, announced earlier in the week at a press event in San Francisco it would open a US headquarters and plans to bring its phones States-side later in the year.