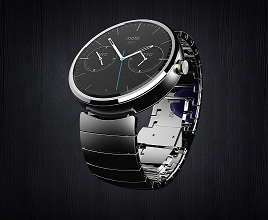 Motorola has slated a press event for early September, sparking speculation as to what the company is planning to unveil.

With Motorola having been ramping-up the wearables PR machine since Mobile World Congress, it is certainly likely the company’s Moto 360 smartwatch will make an appearance. With its round-face, the device has been well received so far for its design, although Motorola has yet to reveal any functionality that will set it apart from the rest of the smartwatch pack.

It had been reported that retailer Best Buy had temporarily pushed a Moto 360 product page live, which indicated a price tag of $249. It would include a 1.5-inch display, built-in heart rate monitor and pedometer, and be waterproof.

Also anticipated are updates to its existing Moto X and Moto G smartphones.

The next generation Moto X, which has been referred to as Moto X+1, is likely to see an increase in screen size to 5.2 inches, with the resolution upped to 1080p (from 4.7 inches and 720p).

Other suggestions include a 2.4GHz quadcore Qualcomm Snapdragon processor, 16GB of storage, and a 13MP camera – indicating a positioning that is high-tier, but not bleeding-edge.

It is not clear if the two headline features of the original Moto X – advanced voice recognition and customisation – will make it through to the new device, although it does seem likely.

With regard to the Moto G update, it is expected the device will have a larger screen (up to 5 inches from 4.5 inches) and front-facing stereo speakers. One of the main areas of criticism – the onboard camera – will also see some improvements, with an upgrade to 8MP from 5MP likely.

Motorola has already updated Moto G once, adding 4G connectivity and a microSD slot – the latter again addressing one of the biggest pain points.

A number of retailers have already began cutting the price of Moto G, ahead of the new launch.

The invitation also suggests that the company will release a new headset peripheral. While this alone is not particularly interesting, Motorola may choose to take it more down the wearable route, by adding additional sensors and features on top of its audio capabilities.

Motorola is not the only company planning to announce new devices at the start of next month: Samsung, Sony, Huawei and Microsoft Devices Group are among the top-tier names with events scheduled for IFA2014 in Berlin, Germany.

But while Motorola’s future parent, Lenovo, has an event on the calendar at IFA, the US device maker is going it alone with its press presentation taking place in Chicago – which certainly reflects where its attention has been focused in recent years.

And Apple’s next iPhone is also expected to debut on 9 September.