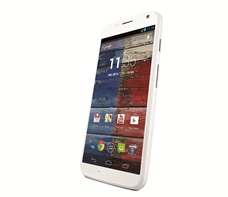 Motorola unveiled its long-anticipated flagship Moto X smartphone, in what was very much a US-centric announcement.

In a statement, the company said that consumers “want the choice to have their phones assembled in America”, a statement that may not carry the same weight in the rest of the world.

In its press release, Motorola mentioned its US assembly process four times.

This will not initially be an issue, however, as the device will “be available in the US, Canada and Latin America starting in late August/early September”.

A wider launch is certainly a possibility, with Motorola noting that “you’ll hear from our carrier partners around the globe regarding exact pricing and availability”.

A differentiating feature for Motorola X is the customisation capabilities. Through an online Moto Maker tool, customers can choose the colour, and decide on details such as front and back accents, memory, wallpaper, “even add a name or short message”.

In terms of feature, the device offers voice response without the need to wake the device first, and Active Display, which delivers important information automatically to the screen.

And echoing Motorola’s previous strategy, the company talked up the battery life of Moto X.

It terms of specifications, it has a 4.7-inch HD (720p) screen, 10MP main camera, and is powered by Motorola’s previously discussed X8 “Mobile Computing System”. It will be available in 16GB or 32GB versions, supported by 50GB of free storage on Google Drive.

The device runs Android 4.2.2, rather than the latest version of Android (4.3), despite Google’s ownership of Motorola.

It will come in CDMA and WCDMA versions, and be available in the US through AT&T, Sprint, US Cellular and Verizon Wireless – T-Mobile US customers are being directed to Motorola.com. LTE is also on the spec sheet.

The handset maker has also partnered with Sol Republic to offer a range of supporting accessories, including headphones, speakers, cases, docks, “and more”.

Moto X will be priced at $199 with a two-year contract.