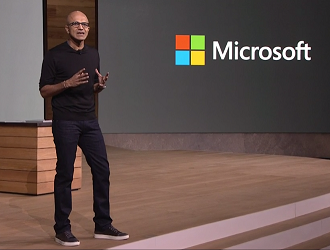 Microsoft updated its Lumia and Surface smartphone and tablet lines, as it looks to capitalise on momentum surrounding Windows 10 to boost its efforts in the mobile market.

With Windows 10 having been available for several months in tablet and PC form, the company now says there are 110 million devices using the new platform – aided no doubt by the free upgrades that are available.

“We now begin a new chapter of Windows 10, with new devices built for Windows 10, from us and our partners,” Satya Nadella (pictured), CEO of Microsoft, said at the launch event. 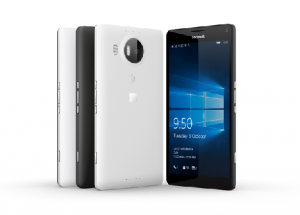 Introducing the new smartphones, Panos Panay, Microsoft’s former Surface chief who now has a broader role in the device business, said: “We see our opportunity with Lumia like we saw our opportunity with Surface — to reinvent the category and make people productive in new ways.”

As anticipated, the headline smartphone unveiling was a pair of high-end devices – Lumia 950 and Lumia 950XL (pictured). Noting that the devices have already been widely reported, Panay quipped that such leaks “ruin my moment”.

Unsurprisingly, much of the focus was on Windows 10, with another demo of Continuum, Microsoft’s technology designed to deliver a seamless experience across smartphones, tablets and PCs. Support for Microsoft’s apps including Office, Cortana, Skype and OneDrive was also prominent, as part of the company’s efforts to focus the devices on “productivity”.

Features highlighted include the use of two antennas, to enable optimum connectivity however the device is being held or used, and “tablet-class liquid cooling”, using technology developed by its Surface team.

Also highlighted was the camera features, building on the earlier work done by Nokia’s camera team in devices such as Lumia 1020, with Panay claiming that “all the generations of work that has come into the camera will blow your mind”. Onboard is a 20MP sensor, with fifth-generation optical image stabilisation and a dedicated camera button.

The devices have 32GB of storage, with expansion slots.

Unveiled with much less fanfare was an entry-level Lumia powered by Windows 10, called Lumia 550.

It has a 4.7-inch HD (720p) screen and LTE support. It is powered by a 1.1GHz Qualcomm Snapdragon chip, with 8GB of onboard storage (and expansion slot), 5MP main and 2MP front cameras.

Available from December in “select European markets” and with more to follow, Lumia 550 is “much more affordable” at $139. 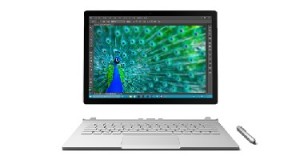 Microsoft also unveiled a new version of its Surface Pro tablet, stating that this marks “the fourth generation of building a tablet that can replace your laptop”.

Noting Apple’s recent entry into the high-end tablet market, Panay said that “we have competitors, and they are chasing it. It’s pretty cool”. The Surface business has grown from scratch to more than $3 billion in revenue in three years.

The new device has a slimline design, and sees a slight increase in screen size (to 12.3-inches from 12-inches), without there being an accompanying change in footprint.

Pricing starts from $899 for a 128GB Surface with Intel Core M3 processor and 4GB of RAM, increasing in steps up to the $2,199 512GB Intel Core i7 device with 16GB of RAM. Reference was also made to a device with 1TB of storage, although this did not appear on the price list.

Microsoft is also extending the Surface brand into the laptop space, with the company looking to do “what it did for tablets to laptops”.

The company described the product – Surface Book (pictured) – as the “ultimate laptop.” It is the company’s first product in this category and, in addition to functioning as a laptop, has a detachable keyboard so it can be used “like a clipboard” – the company was careful not to use the word tablet at this stage.

Continuing his theme of comparing with Apple products, Surface Book is said to be twice as fast as Macbook Pro. 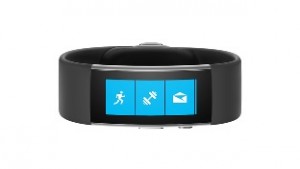 The company also updated its Band wearable, stating that following the launch of its first product last year, it has been “incorporating customer feedback on functionality, hardware and partnerships”.

It now has a “breathable and flexible” design, with no rigidity to make it uncomfortable when worn on the wrist, and a curved screen. It has gained a new sensor in the shape of a barometer, which can be used to monitor elevation.

The new version of Band is available for pre-order now, with availability from 30 October 2015. Pricing is $249.

Previous ArticleTablets set for return to growth in 2016
Next ArticleNokia bosses dominate leadership of $18B Alcatel-Lucent deal ; no mention of CTO role