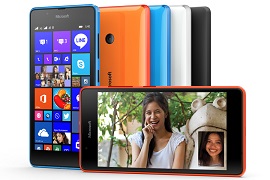 Microsoft unveiled yet another affordable addition to its Lumia smartphone line, describing Lumia 540 Dual SIM as for “young, ambitious people looking for their first serious smartphone”.

The device appears to be the successor to Lumia 535 and Lumia 535 Dual SIM, which were unveiled in November 2014.

The company said that Microsoft services such as Skype and Office are available “out-of-the-box”, with 30GB of free cloud storage provided via Microsoft’s OneDrive. As with many of Microsoft’s other device releases, it will be upgradeable to Windows 10 when this becomes available “later this year”.

Also on the feature list is “smart dual SIM”, which allows people to assign unique profiles to SIM cards, such as work or family. It does not offer 4G support, however.

Lumia will be “priced to appeal to value-conscious customers”, starting at $149. It will start rolling out in India, Middle East and Africa, Asia Pacific and Italy, beginning early in May.

While Microsoft has been able to build-up some traction for its Windows Phone platform in the lower tier and in certain markets, the company has been less active in terms of releasing higher-spec devices.