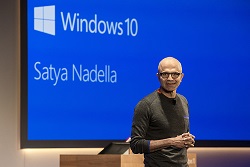 Microsoft announced a $3.2 billion loss for the quarter – reportedly the worst in its history – after recording a previously-disclosed $7.5 billion impairment charge related to its acquisition of Nokia’s devices and services unit.

The company announced plans to cut almost 8,000 jobs earlier this month, alongside the impairment charge on the ailing devices business. It has now said it is taking a restructuring charge of $780 million as well, in addition to $160 million related to a previous reshuffle.

In total, these items totalled $8.4 billion.

Satya Nadella, CEO of Microsoft, said in a conference call that “the big shift that we are making when it comes to phones is to not think about phones in isolation”, instead with the planned shift to Windows 10 meaning it is looking at “the Windows ecosystem in its entirety”.

He drew parallels with the much maligned, but now significantly improved, Surface business. “I feel that we have a formula there that I would like to apply more broadly” he said, related to “delivering innovation, growing our own economic return for it, stimulating demand, creating categories”.

The focus in future will be “great flagship phones for Windows fans” – targeting a high-end where the current portfolio is notably weak – and the business segment, where “we have, in fact, good traction”.

In the quarter to 30 June 2015, Microsoft sold 8.4 million Lumia devices, which was an increase over last year’s full quarter sales, but as the mix has shifted to lower-cost devices, average selling prices have continued to decline. Gross margin also declined driven by lower per-unit margins on Lumia devices as well as reduced volumes in non-Lumia phones (19.4 million non-Lumia phones were sold, “as the market for feature phones continues to contract”).

Phone hardware sales of $1.23 billion were down 38 per cent year-on-year from $1.98 billion (the prior year figure reflects the financial performance from the acquisition of Nokia Devices & Services on 25 April 2014). Sequentially, sales fell from $1.40 billion. Gross margin for this unit was negative $104 million, compared with a positive $54 million in the prior year period.

On a group level, revenue declined 5.1 per cent to $22.18 billion. Operating loss was $2.05 billion following $8.44 billion of impairment, integration and restructuring charges, compared with a prior-year operating profit of $6.48 billion.

Devices and Consumer revenue declined 13 per cent to $8.7 billion, impacted by factors including the end of the Windows XP refresh cycle. Manufacturers are also now tightly controlling inventory ahead of the Windows 10 launch.

Surface revenue grew 117 per cent to $888 million, driven by Surface Pro 3 and the launch of Surface 3, with a “healthy attach of accessories”.

And Commercial revenue “increased slightly” to $13.5 billion, with commercial cloud revenue growing by 88 per cent driven by Office 365, Azure and Dynamics CRM Online.

“Our approach to investing in areas where we have differentiation and opportunity is paying off with Surface, Xbox, Bing, Office 365, Azure and Dynamics CRM Online all growing by at least double-digits,” Nadella said.