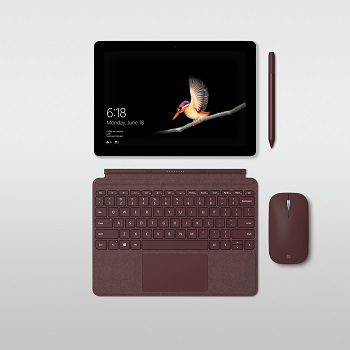 Microsoft took its Surface line to a cheaper price point, with its $399 Surface Go described as its “smallest and most affordable” product in the line to date.

While the concept of a two-in-one device is not new to Surface, previously it was more of a premium proposition. Microsoft’s current product in this segment is the 12.3-inch screen Surface Pro, priced from $799, which is more of a rival to Apple’s iPad Pro line.

Microsoft’s last Surface device outside of the Pro segment was the $499 Surface 3.

In a statement, Panos Panay, chief product officer, said the aim of the 10-inch Surface Go is to be lightweight, productive and “affordable to more people”.

The low price does not include the touch cover needed to add a keypad to Surface Go – something of a must to take advantage of its productivity credentials. The Verge reported this adds $99 to the total, as does a Surface Pen.

Microsoft said support for Office apps was “one of the things that was critical to the experience we had in mind”.

But the $399 price point puts it in competition with Apple’s base $329 iPad, which has access to a large catalogue of apps optimised for the tablet.

Surface Go runs Windows 10 S, with a “one-way” switch to Windows 10 available. It features a PixelSense display with 1800×1200 resolution and ten-point multitouch.

Two configurations of the Intel-powered device are available: with 4GB of RAM and 64GB storage (eMMC), or 8GB RAM and 128GB storage (SSD). It also has a built-in kickstand.

Orders are already being taken for a Wi-Fi version of Surface Go, with products available from 2 August. An LTE-enabled version will follow “later this year”.