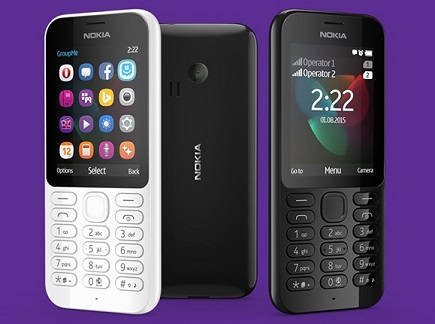 Microsoft added a new feature phone to its line, Nokia 222, which it said is “designed to connect more people to the internet and allow them to capture and share their world in new ways”.

The device – in single- and dual-SIM versions – will be available from September, priced at $37 before taxes and subsidies.

The company described the device as “internet ready”, including Opera Mini Browser.

The specification of Nokia 222 is as sparse as you would expect: it includes 2G-only connectivity, 2MP camera, microSD expansion slot, and 2.4-inch QVGA screen.

Black and white versions will be available.

The launch follows the introduction of the Nokia 215 earlier this year, which was positioned as Microsoft’s “most affordable internet-ready phone”, priced at $29.

The future of Microsoft’s non-smartphone business looks bleak, following Satya Nadella’s decision to base its strategy on “a vibrant Windows ecosystem including our first-party device family”.

The company has seen its device volumes tank as the market shifts to smartphones – an area where Microsoft has also struggled to gain traction.