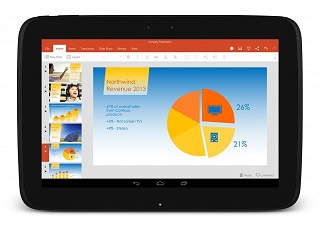 Microsoft announced partnerships with 20 more Android tablet makers which will see Office apps and Skype pre-installed, with LG and Sony being the headline additions.

The companies join Dell and Samsung, which already have agreements in place, and Microsoft now has 31 partners which will offer devices with “Word, Excel, PowerPoint, OneNote, OneDrive and Skype in the near future”.

Nick Parker, corporate VP in the OEM division at Microsoft, said the deals show how it is “leveraging the scale of the hardware ecosystem”, which is “a cornerstone of our cross-platform services strategy”.

While terms of the deals were not disclosed, Microsoft said that partners will be able to increase the value of their devices by “delivering the rich productivity experiences customers want”, and they will also be “able to take advantage of opportunities to realise new revenue streams”.

According to reports earlier this year, Microsoft has cut deals with vendors which include reducing the patent royalty fees it charges on Android devices in return for the adoption of Microsoft’s core services.

This enables it to bolster its position in the tablet market beyond its own Surface line which, despite seeing some signs of traction, has yet to create much of an impact on the market. Despite tailoring newer versions of Windows to better support touch-driven devices, it also hasn’t gained much in the way of traction with vendors when compared to Android.

And with Android device vendors already embroiled in tough price competition, reduced royalty payments are likely to appeal even before they consider other benefits from installing Microsoft’s software.

The new agreement covers a number of regional players, including Haier in China, Positivo in Brazil, and Wortmann in Germany.