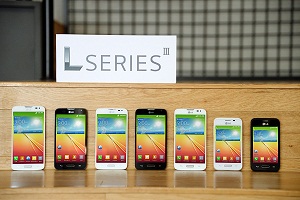 Continuing its practice of making pre-Mobile World Congress device announcements, LG Electronics said the company will be showcasing the third generation of its L Series mass market smartphones in Barcelona.

The company said that the range “retains LG’s distinctive minimal design philosophy while boasting an impressive package that includes enhanced hardware, UX features and OS unmatched in its class”.

LG said that the original L Series and the L Series II have seen “tremendous success worldwide”, with the L Series II “expected to continue the momentum with its handsome design and practical user benefits inspired by LG’s more premium G Series”.

The devices are also powered by Android 4.4 KitKat, “making them further stand out in the mid-tier market”.

Also available are smart covers, which feature a “quick window” to provide users with access to caller ID and time without opening the cover.

“From the design to the OS to the UX, the L Series III exemplifies LG’s commitment to bringing the best smartphone experience to as many consumers as possible. We’re confident that the L Series III will be a strong volume driver in 3G markets,” said Jong-seok Park, president and CEO of LG Electronics Mobile Communications.