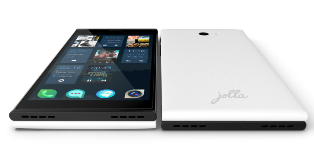 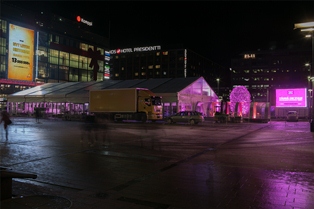 The 7pm launch (local time) is being heavily hyped by both companies. A pop-up DNA shop will be selling the €399 device on the Narinkkatori square, central Helsinki, for a single evening. The pop-up shop will offer 450 devices to consumers who made a pre-booking and were invited to a launch event. The remaining consumers who have made a pre-booking will be able to purchase their phones in early December from all DNA outlets.

Jolla has a number of ex-Nokia staff among its ranks and its Sailfish operating system has its roots in the aborted Meego platform, which was Nokia’s next-generation smartphone platform of choice at one stage.

The headline feature of Jolla’s first device is a two-part design, with the changeable rear portion enabling users to customise their smartphones – with “colours, fonts, tones, profiles, [and] functionalities” modified by swapping. The device has a 4.5-inch display, dualcore processor, 4G connectivity, 8MP camera, and user-replaceable battery.

“Jolla interests people since it has a fantastic story and is a genuinely different alternative. As a Finnish operator, DNA considers it important to support a new Finnish success story, in which we see great potential. We take a bold startup attitude to our own operations as well,” said business director Cedric Kamtsan, responsible for the Jolla project at DNA.

Both companies are reluctant to reveal sales forecasts.

DNA noted in a statement that “this new alternative has attracted an enormous amount of interest, and the expectations of customers are high”. The operator added that “thousands of Finns have made pre-bookings” since May. A spokesperson for Jolla, meanwhile, told Mobile World Live that the vendor is “currently ramping up mass-production and is working hard to cater to the demand. We have not given any estimates for the longer-term.”

DNA’s Kamtsan emphasised the fact this first device will act as a testbed for the future evolvement of Jolla’s products: “The Jolla is right for people who want an individual telephone and enjoy modifying it to their own tastes. The Jolla is being developed in a spirit of co-creation and is being constantly improved on the basis of feedback from customers. Until now, we at DNA have been the sparring partners, but now that role will pass to Jolla users,” commented Kamtsan.

Jolla faces a huge challenge in tempting users away from the incumbent platforms of iOS and Android (although it’s worth noting it has made efforts to ensure its Sailfish OS supports Android-based apps). Comments on social network sites over the last few days from Jolla staff have suggested that the journey to today’s launch has been troubled.

It is not known when Jolla will see an international rollout (although Jolla is committed to delivering any phones to consumers outside Finland who successfully purchased a device online in the pre-booking period). “We are first serving the customers who have pre-booked the device,” said a Jolla spokesperson.

The company has an office in Hong Kong, so an Asian launch is likely.

Previous ArticleSmartphone prices to fall 13% in 2013, with more to come – study
Next ArticleSFR demerger backed by Vivendi board