Jolla Tablet to go ahead as it smashes through crowdfunding target 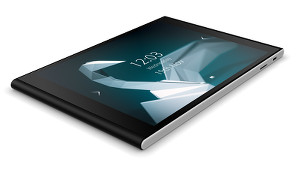 Jolla, the Finnish smartphone startup, reached and passed its crowdfunding target to build its first tablet computer within two hours of the campaign going live.

The company was looking to raise $380,000 on the Indiegogo service to fund the manufacture of the 7.9-inch Jolla Tablet. At the time of writing, almost $600,000 has been raised.

The pledged funds are continuing to increase rapidly, with the campaign scheduled to continue for another 21 days to 9 December.

The device runs Sailfish OS 2.0, which adds the Ambiences customisation feature, and Events, which show messages, calendar events and other relevant information in a single view.

The tablet also sports a 1.8GHz quadcore Intel processor and a 5 megapixel camera. Jolla emphasised that the 330ppi display matches the resolution of the iPad Mini 3.

The expected retail price if the tablet goes into full production is $249. However, the first 1,000 people to contribute money on Indiegogo secured the purchase of the tablet for $189, with the second 1,000 needing to pay $199. The next 2,000 will be able to buy the tablet for $204. The first devices are due to be shipped next spring.

Jolla said that it is employing crowdfunding as a way to involve their user community and gain feedback on what should be included on the tablet ahead of a full-scale launch.

The current markets in which users can buy a Jolla Tablet through the crowdfunding campaign are the EU, Norway, Switzerland, United States, India, China, Hong Kong, and Russia.

Jolla developed Sailfish from the Linux-based MeeGo OS originally created by Nokia in partnership with Intel but abandoned in 2011 when Nokia adopted Microsoft’s Windows Phone platform for its smartphones.

The assets of the OS were subsequently transferred to the Linux Foundation.

Sailfish has been offered on Jolla’s smartphone, which was first made available late last year, initially in its home market in partnership with operator DNA, and direct from its web store to selected EU markets.

Deals to make the device available in India and Hong Kong have since been announced with plans to distribute in the UK, other parts of Europe, the US, Russia and China.

The differentiating features of Sailfish include a gesture-based interface and the ability for users to control app functionality without having to fully open them.

The OS has a range of native apps, but is also compatible with Android titles, which can be accessed by third-party stores such as Amazon Appstore. Google Play is not supported.