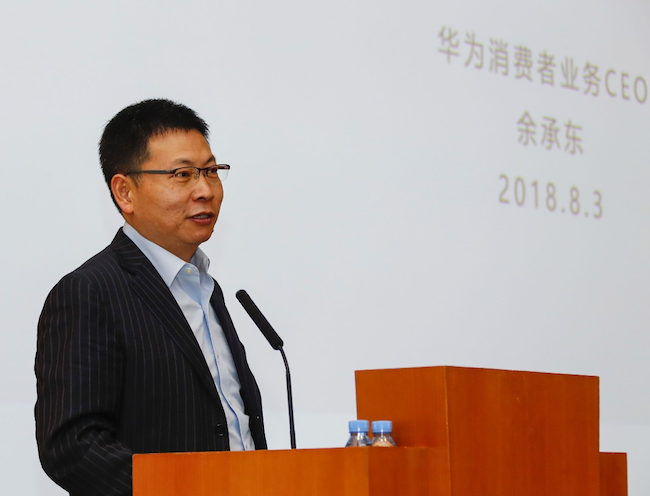 Huawei, which overtook Apple as the world’s second-largest smartphone vendor in Q2, set its sights on being the top player by the end of 2019.

The China-based device maker is targeting shipments of 200 million smartphones this year, a 31 per cent increase from 2017 (153 million). Richard Yu, CEO of Huawei’s consumer business group (pictured), said at a press conference it is was possible it could become the largest smartphone vendor by Q4 2019, Reuters reported.

Huawei said it shipped more than 95 million smartphones in the first half of 2018. In a falling global market during Q2, the company boosted smartphone shipments 41 per cent year-on-year to give it a 15.5 per cent global market share, data from Strategy Analytics showed. The company shipped 54.2 million smartphones in the quarter, expanding its market share by nearly 5 percentage points from Q2 2017, while Apple slipped to third with an 11.8 per cent share.

Yu said the past six months had been incredible for Huawei’s consumer business, “marked by robust growth of our business across all markets and product lines”.

Huawei provided a breakdown of smartphone sales for the first half of the year, with shipments of its high-end P20 series surpassing 9 million units. It also shipped more than 10 million Mate 10 models and 50 million units of its mid-tier Nova series. Total shipments of Nova models increased by 60 per cent year-on-year.

The vendor said shipments of wearables in H1 jumped 147 per cent from a year ago.