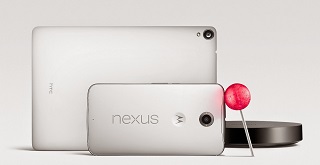 Google announced the latest devices in its Nexus product line, accompanied by the launch of the latest version of Android – 5.0 Lollipop.

While the timing fits roughly with Google’s previous schedules (Nexus 5 and KitKat were announced in November 2013), it has also been suggested that the company looked to get a jump on Apple, which is expected to announce an iPad update this week.

Nexus devices
Google has shared the love with its Nexus update, with Motorola and HTC both offering products. This marks a return to the stable for HTC, which has not been on the roster in recent years, and is the first time Motorola will have offered a Nexus-branded product – despite its ownership by Google.

Motorola is manufacturing Nexus 6, a phablet device with 6-inch quadHD (2560×1440 pixel) display and 13 megapixel camera. It also has dual front-facing speakers and “Turbo Charger”, to deliver six hours of use with 15 minutes of charge.

The device is powered by a beefy 2.7GHz quadcore Qualcomm Snapdragon 805 processor.

It will be available for pre-order through the Google Play store in late October, and in stores from 3 November, starting at $649. It will come in two colours (blue or white) with two memory options (32GB or 64GB).

Motorola said that in total it will be available in 28 countries across Europe, Asia-Pacific and North America heading in to Q1 next year.

HTC is manufacturing Nexus 9, a tablet device with 8.9-inch screen. Google said that it is “small enough to easily carry around in one hand, yet big enough to work on”. Also available is a keyboard cover that magnetically attaches, folds into two different angles, and “rests securely on your lap like a laptop”.

It is powered by a 64-bit 2.3GHz Nvidia processor, and will come with either 16GB or 32GB of storage. It also has an 8MP rear and 1.6MP front cameras.

Away from mobile devices, the company also announced Nexus Player, a streaming media device created in collaboration with Asus (an existing Nexus tablet partner). It is also described as a “first-of-its-kind Android gaming device”, with owners able to play on an HDTV using a game pad, before being continued on an Android mobile device.

It is also Google Cast Ready, so content can be streamed from “almost any Chromebook or Android or iOS phone or tablet” to a television.

Google previously unveiled an Android-powered streaming device, called Nexus Q, in 2012. However, it did not receive a full release, after criticism that it did not offer features which justified its price.

Nexus 9 and Nexus Player will be available for pre-order imminently and in stores from 3 November.

Android 5.0 Lollipop
Google said the new version of Android is its “largest, most ambitious” release, with more than 5,000 new APIs for developers.

The central tenet is that with more devices connecting together – such as smartphones, tablets and televisions – the expectation is that “things just work”.

With Lollipop, users can more easily access the songs, photos, apps and even recent searches from one device on others, and “the experience should feel the same”.

The platform has a consistent design across devices, which Google calls “material design”.

There is also a battery saver feature which enables device life to be extended by up to 90 minutes, and support for multiple user accounts and a guest user mode.