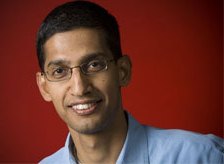 Google said that its mobile head, Andy Rubin, has “decided to hand over the reins and start a new chapter” with the company.

In a blog post, Larry Page, Google’s CEO, said that the Android business will be led by Sundar Pichai (pictured), “in addition to his existing work with Chrome and Apps”.

It has been suggested that the shift of Android into the same group as Chrome and apps indicates that the company is looking to unify its work across these different efforts.

Page described Android as “the most used mobile operating system in the world”, noting global partnerships with more than 60 manufacturers.

More than 750 million Android devices have been activated globally, with 25 billion apps downloaded from Google Play.

“So while Andy’s a really hard act to follow, I know Sundar will do a tremendous job doubling down on Android as we work to push the ecosystem forward,” Page said.