The launch of devices such as Samsung’s Galaxy S4 will lead to the size of the market for “high quality” AMOLED screens more than doubling in size by 2017, according to IHS iSuppli.

According to the company, within the mobile handset display market, the share for AMOLED (active-matrix organic light-emitting diode) displays will grow from 7.9 per cent in 2013 to 15.2 per cent in 2017.

Samsung Display – the supplier of the AMOLED screens to Samsung Electronics – is providing a 1920×1080 full HD display for the Galaxy S4, up from 1280×720 WXGA in the Galaxy S III.

While the device is not the first to include a display of this resolution – other devices with 1920×1080 displays include the HTC One, Sony Xperia Z, ZTE Grand S, LG Optimus G Pro and Lenovo Ideaphone K900 – the others use thin-film transistor LCD (TFT-LCD) displays.

IHS iSuppli said that there have been challenges in taking AMOLED screens to densities greater than 300 pixels per inch, because it is “difficult to achieve dense pixel arrangements using the conventional Fine Metal Mask process while still securing enough display brightness and not compromising power consumption”.

In order to address this, two new technologies have been introduced. It has increased the lighting area in AMOLED panels with a new structure of Pentile matrix, and used phosphorescent material for the green subpixels, allowing for better light management and lower energy consumption.

While the Galaxy S4 will be the first full HD AMOLED display device reaching the market, IHS iSuppli concluded that “material lifetime, colour balance and limited supplier base still need to be addressed for a larger market presence of OLEDs and stronger competitiveness against LTPS (low-temperature polysilicon) TFT-LCDs”. 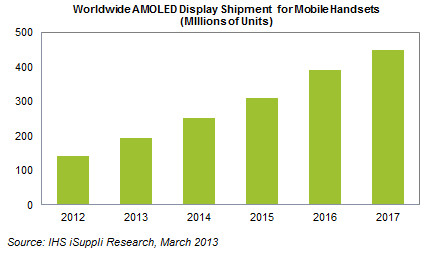