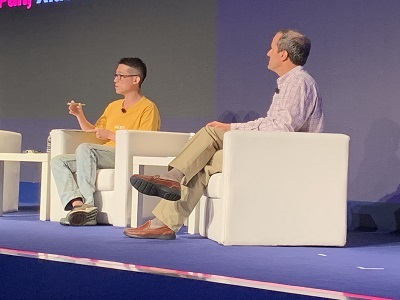 LIVE FROM MWC19 SHANGHAI: Executives from Xiaomi and imaging technology company Light shared their views on the camera capabilities of smartphones, and the different approaches taken by different vendors.

Patrick Pan, director at Xiaomi (pictured, left) – which has a partnership with Light – noted that for vendors, other factors also come into consideration. This means that there will be variations between the configurations used, for example in number and type of lenses supported.

“The different OEMs may have different choices. For example, their users are of different age, have different habits, and different expectations for prices. All of these need to be considered,” he said. “We are still at the early stage of developing multi-camera devices.”

Xiaomi and Light have not released details of their work together yet.

Different goals
Noting that Google has been slow to embrace multiple cameras in its Pixel range, Barnett noted the company’s motivations and capabilities are not necessarily the same as for other smartphone makers.

“There is a trade-off among different phone makers about what kind of resources they spend their money on to make a better phone, to make a better camera. Obviously Google can spend a huge amount of money and have a huge team to build all these algorithms, which they can use across Google Photos and other properties, and that’s one way to get great photos,” he said.

“The other way to do it, which is perhaps more accessible to OEMs, is to just add off-the-shelf components, and fuse the images of multiple cameras to get decent photos that way. So there’s a trade-off between engineering investment and bill of materials and component investment, and there are different right answers for different phone makers.”

Another key application for multi-camera imaging is in the automotive sector, where high-quality images are needed to enable autonomous and assisted driving applications.

“Light is working on multi-camera autonomous driving: we’re doing that because of the ability of multiple cameras to give better depth. Some people say about the dark, and how you work in the dark, but if you think about it, when you are driving there is always enough light to see – from your headlights, from street lights, so the camera will always have light,” Barnett said.

But Pan also pointed to other technologies, such as Lidar, having a key role to play in this segment.