The five Chinese vendors shipping the most smartphones worldwide – Lenovo, Yulong, Huawei, ZTE and Xiaomi – made up 20 per cent of the total market in Q2, up from less than 15 per cent a year.

According to analyst firm Canalys, Lenovo and Yulong were among the top five smartphone makers during the second quarter of 2013, after Apple and Samsung but ahead of LG Electronics. And while Samsung and Apple saw their shipment volumes increase, both lost market share to Chinese players.

Apple’s market share fell to its lowest level since the first quarter of 2009, but its numbers were “buoyed” by the performance of older models after a price cut. Chris Jones, VP and principal analyst of the company, said: “Apple needs to respond to this dynamic and it is evident from the performance of its older models this quarter that there is real demand for a new low-cost iPhone.” 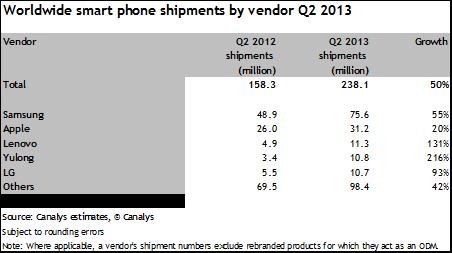 Shipments in China grew 108 per cent year-on-year, the second highest growth rates of all the major markets, to 88.1 million. This represented more than one third of all worldwide shipments.

Lenovo was in second place in its home market, with 95 per cent of its 11.3 million shipments in China. This alone put it into the top five globally, with its additional international shipments helping it secure third place.

Nicole Peng, research director for Canalys in China, said: “Lenovo has benefited from its large TD-SCDMA product portfolio, much of which is aimed at the low-end. China Mobile’s strategy of continuously pushing TD-SCDMA smart phones to the mass market benefits local vendors, in particular Lenovo and Yulong.”

While the US remained in second place in terms of shipments, it was noted that “India stood out this quarter with smartphone shipments growing the fastest of all the major markets”. Samsung took more than one third of the share, followed by local player Micromax at 22 per cent.

Jessica Kwee, analyst, said: “India is a market in transition, moving from feature phones to smart phones, and is a market that offers huge potential as hundreds of millions of users have yet to upgrade their feature phones. Domestic vendors, such as Micromax and Karbonn, are capitalising on the popularity of their feature phones and are quicker to respond to local market demands, hence their current success.”