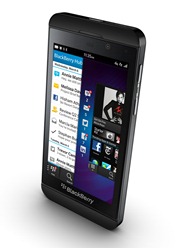 BlackBerry said that it has shipped 1 million devices powered by its BlackBerry 10 platform in its most recent quarter, as the recovering smartphone maker also reported a profit for the period.

However, the numbers also showed many of the challenges still facing the company. In total, it shipped 6 million smartphones during the period, continuing its downward trend. This compares with 6.9 million in the quarter to 1 December (BlackBerry’s fiscal Q3), and 7.4 million in the prior sequential period.

The company also said that Mike Lazaridis, founder, and former co-CEO, is set to step down as a director of the company. It said that he had “fulfilled the commitment he made to the board in January 2012” – the point at which Thorsten Heins was named as its new CEO.

Looking forward, BlackBerry said it will be spending heavily to support the launch of BlackBerry 10 devices, with an anticipated 50 per cent sequential increase in spend in Q1 fiscal 2014. It said that taking this into account, it expects to breakeven in Q1, based on “its lower cost base, more efficient supply chain, and improved hardware margins”.

Thorsten Heins said: “As we go into our new fiscal year, we are excited with the opportunities for the BlackBerry 10 platform, and the commitments we are seeing from our global developers and partners. We are also excited about the new, dynamic culture at BlackBerry, where we are laser-focused on continuing to drive efficiency and improve the company’s profitability while driving innovation.”