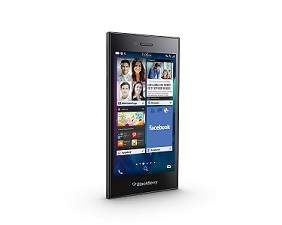 BlackBerry announced the “global rollout” of its BlackBerry Leap smartphone, first unveiled at Mobile World Congress in March 2015, which it said targets “young power professionals who want to get things done and companies looking for enterprise fleet renewals”.

The device is available from today in the UK, and will continue to rollout “over the next few weeks across countries including Germany, France, US, Canada, UAE, Saudi Arabia and India”.

BlackBerry is currently listing the device in the UK at £199 unlocked. No operator support is listed.

Ron Louks, president of devices and emerging solutions at BlackBerry, said: “With an all-touch screen the BlackBerry Leap rounds out our portfolio of BlackBerry 10 devices, offering an affordable choice to mobile professionals who require a smartphone that safeguards sensitive communications and keeps them productive.”

The company highlighted features such as its security capabilities (“support for encryption, plus built-in malware protection and back-up, wipe and restore”), digital assistant with voice and text input, and “dual app storefronts” – BlackBerry World for productivity, and Amazon Appstore for Android apps and games.

When it comes to specifications, however, there is little to make the smartphone stand out from rivals. It has a 5-inch HD (720p) screen, is powered by a dual-core 1.5GHz Qualcomm processor, has 8MP front and 2MP rear cameras. LTE connectivity is also on the spec-sheet.

Following the launch of BlackBerry Classic in December 2014 and BlackBerry Passport in September, the company now has a fresh portfolio of devices with which to try and boost its shipment numbers.

And it needs all the help it can get: in its most recent quarter, it recognised revenue on 1.3 million smartphones, although its average selling price has climbed.