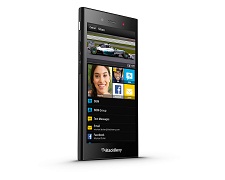 BlackBerry has a “very strong” device roadmap, and intends providing an update on its plans at Mobile World Congress 2015, according to John Chen, the company’s CEO.

With the Passport device announced last week – and more than 200,000 orders in place as of last Friday – the executive said that its focus now is on the long-awaited Classic, which is expected to debut before the end of this year.

In the company’s conference call, Chen said that at the current price point – $599 for Passport in the US – the new device is profitable.

Chen also said that with regard to its current portfolio, “our demand is outpacing supply at this point”. The company’s Z3 (pictured), which originally debuted in Indonesia, is now available in 12 more countries including India, Philippines, UAE and South Africa, and a further rollout is planned.

BlackBerry recognised revenue on around 2.1 million devices in the second quarter, a healthy increase on the 1.6 million it reported for Q1. But with 70 per cent of shipments coming from BlackBerry 10 devices, there is still a notable volume coming from legacy BlackBerry 7 devices – an activity Chen said is “pretty much done”.

And with the Z3 being aimed at emerging markets and other BlackBerry 10-powered devices somewhat long in the tooth, average selling prices are also pressured. The introduction of Passport (and subsequently Classic) will address this, with BlackBerry also noting that it still has “some products that have a positive margin left in them”.