Alcatel OneTouch announced a broad portfolio refresh at CES 2016 last week, which included Windows 10 devices as well as a number of other products.

Set to be available exclusively from T-Mobile US, the company’s first Windows 10 smartphone is called Fierce XL. It is described as “affordably priced” (Microsoft said $139.99), but comes with support for Microsoft’s productivity applications, as well as having the Cortana voice assistant onboard.

This is not the company’s sole Windows 10 device: also unveiled was the Pixi 3 (8) tablet. Set for availability in Europe and Latin America, the 8-inch screen device also includes integrated LTE connectivity.

An Android 5.0-version is also available.

Pixi
Moving away from Windows 10, the company unveiled a new line of Pixi-brand devices, Pixi 4 (pictured). 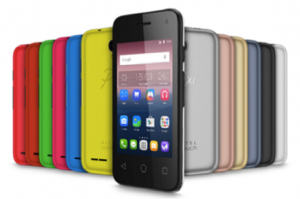 In a statement, it said that the line “offers premium entry-level smartphones and tablets with a comprehensive user experience in design, audio, camera and battery life”.

Among the features are Polaroid imaging software and Arkamys optimised speakers.

Said to be “among the slimmest models in the entry-level segment”, Pixi 4 also “comes in a rainbow of colours, from cool, metallic silver to eye-popping, candy-coloured brights”.

Finally, Alcatel OneTouch unveiled its CareTime children’s watch. A GPS tracking device, parents can also call or send voice messages to children, and calls can be made to pre-set contacts.

TCL to start production in Brazil and India in 2016