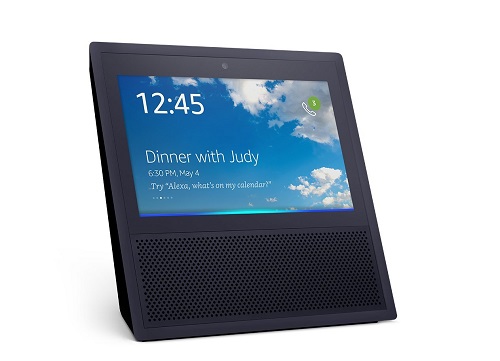 Amazon stepped up the battle in the smart speaker segment, unveiling the Echo Show, which comes equipped with a built in touch screen.

The Echo Show follows the footsteps of Amazon’s Echo and Dot speakers, but is differentiated by enabling users to perform certain tasks on a 7-inch touch screen in addition to orally via the company’s voice powered Alexa virtual assistant.

Amazon talked up a feature enabling video calls between Echo Show owners and voice calls to Echo and Echo dot devices. The company also said the device provides visual interaction with Alexa, enabling services which may have been too complex for the voice-only commands of its existing speakers.

On the hardware side, Echo Show comes equipped with eight microphones, two Dolby stereo speakers and a 5MP camera. The device is due to go on sale in the US in June, priced $229.99.

The company’s existing products are already competing against the Google Home speaker, and will face another rival in the form of the Harman Kardon Invoke, which runs Microsoft’s Cortana virtual assistant and is due to launch during 2017.

Apple is also rumoured to be developing a smart speaker, while Samsung – which recently completed an acquisition of Harman Kardon parent Harman International – in March unveiled its Bixby assistant.

Recent data from research company eMarketer indicates Amazon currently dominates the US smart speaker sector, and predicted the Echo and Echo Dot devices would grab a 70.6 per cent market share through 2017.