Equally, as a result of sustained competitive intensity, macroeconomic uncertainty and regulatory changes, particularly in Latin America where the group has ten operations (excluding Brazil) a change was needed. The new strategy is multipronged and includes the operational spin-off of its Hispanoamerica (in Hispam Telefonica includes all of its Latin American units excluding Brazil) assets as it decouples the traditional operating company model, as well as aiming for increased agility and efficiency as the operator creates two new enterprise units, Telefonica Tech and Telefonica Infra, acting autonomously.

Further, Telefonica seeks synergies between the units through a revamp to its corporate centre, as it eliminates operational duplications and centralises procurement.

This blog investigates why management autonomy in this multipronged strategy will enable Telefonica to achieve its goals of agility and efficiency, and can act as a possible template for other operators to emulate in future.

Telefonica re-prioritises markets: the why
While the company is operating in 14 markets globally, it is four markets (Spain, Germany, UK, Brazil) which contribute 80 per cent of its overall revenue, EBITDA and cash flow. Thus, the operator decided to focus investments in these four markets where the existing model remains sustainable (exempli gratia, in Brazil the operator already accelerated heavy fibre expansion to increase reach), while undertaking an operational spin-off of its other Latin American businesses (Hispam).

Across Latin America, investments into 4G are still ongoing and as adoption remains below 50 per cent, capacity issues need addressing for customer adoption to rise. This means efforts to improve 4G capacity and coverage in the region will begin to overlap with the onset of 5G investment as we expect the next-generation capex to pick up over the next two years. The impending investment outlay combined with competitive intensity, inflation and currency depreciation has negatively impacted revenue and put pressure on cash flow. Thus, a new management steps in with freedom to experiment.

Management autonomy in new divisions: Tech and Infra
Telefonica is in the early stages of executing on an operational structure that layers two new horizontal business units, Tech and Infrastructure, on top of its four primary country operations selling mobile, fixed and TV services. Equally to the new self-governance of Hispam, these two units will act autonomously and are tasked with growing revenue in discreet business areas. They will set a strategy for growth and leverage the in-country operations to sell and manage new business contracts. 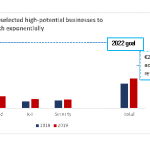 What are the implications for the operator?

Efficiency and autonomy through decoupling business units. The new methods mean Telefonica can now measure growth by solutions and services in the same way platform and cloud players do. Decoupling markets and verticals should also improve operational efficiency in key growth areas. Operational and commercial efficiency will streamline the corporate centre based at its headquarters, optimising use of assets and customer experience.

Telefonica Tech and Infra – best shot at growth? The two new units are targeting a minimum €2 billion increase in annual incremental revenues by 2022. This is equivalent to 8 per cent of its current group total and would therefore be a very meaningful contribution.

Telefonica is not the first MNO to aim for growth outside the core business, and non-core services still only make up a small fraction of most telecom groups’ revenues. Those instances where contributions are higher, such as with AT&T and SoftBank, have typically come as a result of buying into new businesses rather than engineering them organically. Telefonica’s existing B2B sales amount to 26 per cent of group revenues, but these are mostly comprised of traditional connectivity services (leased lines, on-site hosting) into SMEs and corporates.

However, the increased management autonomy and decision-making power will allow the new pure-play B2B business units to develop and iterate on products faster than before. The fact its European operations sit in some of the most industrially advanced countries (Industrial IoT connections in Europe will grow at a 17 per cent annual rate between 2020 and 2025) and can upsell existing enterprise customers to new services using a re-engineered sales approach should stand it in good stead.

From Hispam revamp to the new B2B units, management autonomy is the underlying key to success for Telefonica. And will other players copycat the model? Peers with footprint in similar market conditions will be watching Telefonica and its new units’ success closely, and so will we.