Sub-Saharan Africa has been conspicuously missing from the global 5G story so far, and for good reason. 2G is still the dominant technology in the region, at least until the end of this year, while 4G, which accounts for just 8 per cent of total connections compared to the global average of 46 per cent, is far from mass adoption. There is also the issue of device affordability, which has stymied 4G adoption. With the first wave of 5G devices likely to target the top end of the market, it is not hard to imagine the impact device costs could have on 5G adoption in the region.

Against this backdrop, it is easy to see why the notion of 5G in sub-Saharan Africa may come across as an oxymoron to some people. But is it? 5G attracted a lot of attention at this years’ Mobile360 Africa conference, with numerous mentions on the conference stage and side chats during coffee breaks, even though the subject was not officially on the agenda. I quickly noticed that more people talked about the prospects for 5G in the region at this year’s event, compared to 2018, where 5G and Africa were hardly used in the same sentence.

So, what has changed? Nothing much in terms of Africa’s readiness for 5G or actual 5G-related activities. However, there was a realisation that 5G, as a natural progression from previous generations, will one day become a reality in the region. This in itself raised several pertinent questions among participants, for example when will the 5G era will arrive in the region; which markets will lead the transition to 5G; how should stakeholders, including policymakers, operators and vendors, prepare for the 5G era; and what would the 5G the business case for the region look like, given the network deployment requirements and consumer peculiarities?

An earlier blog captures the contrasting views of operators and vendors to some of these questions at the event.

GSMA Intelligence’s new report 5G in Sub-Saharan Africa: laying the foundations directly addresses these other issues more deeply. The report reflects the perspectives of policymakers, operators, and vendors, and lays out key expectations and considerations for the 5G era, some of which are highlighted below: 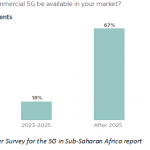 As governments and enterprises across Africa increasingly use technology to tackle the biggest challenges faced by society, and digital trends point to growing demand for enhanced connectivity, 5G will no doubt play a key role in the future connectivity landscape. The technology will support the implementation of transformative technologies, such as AI and IoT, that can improve industrial processes and generate significant social and economic benefits for individuals and communities.

While this scenario is still several years away for most countries in the region, now is the time for ecosystem players including policymakers, operators and vendors, to begin to put in place the necessary building blocks on spectrum, network modernisation, consumer and enterprise use cases, and other relevant areas to maximise value in the 5G era.