The fight against the Covid-19 (coronavirus) pandemic could continue for years before a vaccine is widely available. This will clearly have a negative impact on global health and the global economy. But the good news is mobile technology, in the form of such things as contact tracing apps, can dampen the impact of the virus by reducing the number of people which need to remain in quarantine, leading to an effective allocation of public resources.

Epidemiologists have used contact tracing for decades to help identify people who may have been infected by diseases. Digital contact tracing apps can expedite this process, and can empower users to make decisions which positively impact their health, and the health of others.

The most severely affected countries in terms of Covid-19 cases, the USA; China; Italy; France; and the UK, all have relatively high smartphone penetration. This means smartphone solutions can be a vital tool in fighting the virus in these countries. 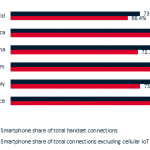 Centralised solutions have mainly been adopted in countries in East Asia. This option is, however, generally less accepted in countries with greater data privacy concerns. We are now seeing the development of decentralised solutions, notably via Apple and Google, which are jointly working on an API. This will allow public health agencies to hire developers to write their own apps which can securely collect anonymised information about user proximity. As well as helping to address concerns on data privacy, a Bluetooth solution requires less battery than GPS or mobile signals.

How effective is Bluetooth-based contact tracing?
A team of researchers at Oxford University in the UK has demonstrated how a contact tracing app could work. They built an epidemiological model based on the UK’s demographic structure and smartphone usage. Their simulation suggests that for the app to be effective in controlling the spread of the virus when the country emerges from lockdown, approximately 60 per cent of the country’s population would need to use it and follow-up its recommendations to self-isolate if necessary. The report states, one infection could be averted for every one-to-two users.

Clearly, the more people who use the app, the greater the impact will be in terms of suppressing the virus, but it will be a challenge to introduce it to the masses. For example, Singapore’s TraceTogether app was launched a month ago, but is only being used by around 1 million of the country’s 5.7 million population. Singaporeans were seemingly reluctant to use the initial version of the app (since rectified) which had to be used in the foreground for the device to work, which prevented the use of other apps and drained the battery.

It’s also likely some Singaporeans did not feel the urgency to install the app due to the country having relatively light lockdown regulations compared to European markets for example. In these countries the desire to end lockdown may be greater, which could motivate more smartphone users to install such an app. However, at the same time, individual concerns about data privacy are more prominent and could limit the adoption of digital contact tracing. Some people may fear hackers while others worry about surveillance and misuse of data by the government.

There is evidence, however, Europeans may be prepared to compromise more on privacy given the potential benefits of a contact tracing app in fighting Covid-19.

Oxford University worked with a team of behavioural economists, who surveyed 6,000 potential app users in the UK, France, Germany, Italy and the USA. The proportion of respondents that said they would install the app fell in a range of 67.5 per cent to 85.5 per cent. Another survey conducted by The Guardian and Essential Research showed around half of people in Australia believed the government’s Covidsafe contact tracing app would limit the spread of the virus and also speed the removal of physical distancing restrictions.

Contact tracing apps are based on a natural model of trace and self-isolation, but effectiveness can be improved if the data is shared further
The simple model is based on a scenario which identifies those that have been in contact with infected people and assumes they will self-isolate, but there is still space to accelerate the process and further reduce the cost to society. This, of course, depends on the availability of public resources and how much data individuals are willing to share with authorities.

If all contacted people are tested then only infected people need to stay at home, which will lessen the impact on economic activity. This, however, means the healthcare system must be able to offer enough tests and they must be able to deliver those tests in time. Both of these objectives will be much easier to achieve if the health system has access to the data generated by the app.

Beyond testing, there are plenty of other ways a healthcare system could leverage the data for good. Resources like hospital beds and ventilators, for example, could be dynamically configured based on the data collected, without waiting for self-reporting. We need these tools at the right place and time to save lives, but not so many that we have wasted resources on excess capacity for a once-in-a-decade epidemic.

What happens in countries with lower smartphone penetration? Tracking based on mobile signals and sending warnings via broadcast text messages can still help, although those approaches also raise privacy concerns (to the extent that any Covid-19 solution involves data from mobile network operators, the GSMA has developed guidelines to help mobile operators support governments and health authorities while maintaining subscriber privacy and trust). These solutions could also present issues with battery life, and the data collected from basic and feature phones is likely to be less granular than that of smartphones and possibly less effective.

There is no universal solution which can apply to all markets. Each country will actually apply a basket of solutions to fight against coronavirus. As the creator of the TraceTogether app said in a recent blog post, “automated contact tracing is not a coronavirus panacea”. We need technology, but it cannot win on its own.