With India electing a new government to power, the vision of a Digital India has been given a renewed focus, but with more vigour. All stakeholders are now forging ahead to turn the dream of 5G by 2020 into a reality. Fibre backhaul, in particular, is expected to be one of the key enablers for 5G in India. Its deployment will remain critical to successful 5G rollout, but this journey will not be a smooth one.

As mentioned in an earlier blog  – Will India get 5G in 2020? – the lack of required infrastructure is a major challenge to 5G rollout in India. To that end, it’s worth understanding the Indian fibre story to date.

Where does India stand today?
According to the National Digital Communication Policy 2018, India enjoyed 22 per cent of fibre coverage between the towers as of March 2018. In order to extend world class high-speed internet connectivity, around 75–80 per cent of mobile towers will have to fiberised; this is the case in markets like the US, China, and Japan. Even getting to a 60 per cent milestone by 2022 (which some consider the bare minimum for the satisfactory delivery of 5G) means there is clearly a long way to go. 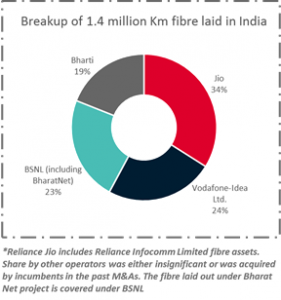 India’s leading telecom operators are committed to invest in fibre; Jio leads the pack followed by Vodafone-idea and Airtel. The government, in turn, has already taken initiatives (most notably BharatNet) to connect the deep rural pockets with fibre. Earlier known as National Optic Fibre Network (or NOFN), BharatNet was conceived with a specific aim to connect nearly 600,000 villages and eventually enable them with commercial internet access.

Evidently, efforts are being made, BUT…

Indian problems
While the necessity of fibre deployment for 5G is obvious, there is no shortage of challenges which will conspire to keep the pace of rollout slow: terrain hurdles, differing right-of-way norms across states, quality & maintenance issues. All of this is compounded by limited clarity on active network equipment sharing between the operators.

Of course, there’s also the issue of cost. Fibre deployment is expensive and comes on top of spectrum costs – which could be high given a mega 5G spectrum sale (275 MHz) coming up. And this is when Indian telcos are already saddled with a staggering debt of USD62 billion[1] as of March 2019.

Clearly, the hurdles are there but as a worthy mind once said, “where there’s a will there’s a way.” And to find its way through these roadblocks, it’s time for India to look into a few nation-wide fiberisation models pursued across the globe and learn what can help India convert this digital dream into a reality.

Predominant models of fiberisation:
Based on research, predominantly five broad models of nation-wide fiberisation emerged across the globe. The models on the top of the chart below (click to enlarge) are considered more successful by some, as they mobilise public-private partnerships in such a fashion that they tend to be more conducive to faster and sustainable expansion of the fibre network to even the deepest pockets of the nation, yet remaining viable for operators to survive financially. 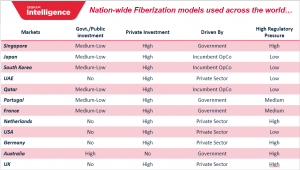 While a case can be made for all the models in India, a “Private-led, graded government support” model suits the most. This resonates with the recent recommendation by TRAI (Telecom Regulatory Authority of India), especially for extension of internet and fibre networks to rural India. Subsequently, DoT has recently proposed to tie-up with the country’s three private operators to ensure connectivity to every India village. DoT plans to work with the private operators by providing 100 subsidies on Capex incurred on extending the connectivity to 43,000 disconnected villages, and have also agreed to subsidise the operating costs for the next five years.

Finally, to tackle the biggest bottleneck – RoW (Rights of Way) – the right policies for permits is a must. There should be cooperation between central and local authorities, where the centre could help in resolving issues like enforcing advance notification of civil works for infrastructure deployment (e.g. road, sanitation, energy, telecoms) and creating a single point of information for granting permits. The state government on the other hand should change its approach to take a proactive stance on dealing with the RoW issues and treat the RoW approvals as social-economic enablers instead of a direct revenue source.

Bottom line – A lot is being done to make 5G a reality, but adequate infrastructure remains the most essential piece of the puzzle in order to become truly ready. Hence, it is important for the operators to continue to invest in additional fibre deployments as building blocks for 5G.

Subscribe to our daily newsletter Back
Previous ArticleHuawei blasts US blacklist additions
Next ArticleXiaomi struggles in Q2, loses market share