Intelligence Brief: What were the hot topics of CES 2020? - Mobile World Live

Intelligence Brief: What were the hot topics of CES 2020? - Mobile World Live

Intelligence Brief: What were the hot topics of CES 2020?

CES 2020 is over. In the six days I was in Las Vegas I was lucky to see a great many things from across the IoT landscape and the broader tech ecosystem. I walked more than 100km (I’m sure this isn’t a record but it felt like it should be at times), and now I’m back it’s time to reflect on what mattered, what the key themes were and where the industry is heading…all from an IoT perspective naturally.

IoT is happening. I discussed some of the key assumptions behind connection growth recently in this blog. We expect consumer IoT connections to almost double between 2018 and 2025, to 11.4 billion, and forecast the smart home will be the largest and fastest-growing consumer IoT segment.

But not everyone has smart or connected devices in their home. Reasons differ as to why this is but the top three responses from our Consumer Insights Survey are they don’t see any benefit in using them; think devices are too expensive; and privacy and security concerns, which is understandable in the current climate (see chart, below, click to enlarge). 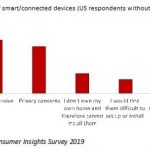 Integration and compatibility challenges come lower in terms of importance, but as this question was addressed at non-users it is possibly not a surprise. We would reasonably expect these to have featured more highly had we sampled existing users (as anyone who has found themselves shouting at an awkwardly stubborn voice assistant will testify).

During our GSMA Intelligence seminar at CES, Do your customers know what IoT is? we discussed all things IoT: how enterprises transform their operations, how operators and vendors are planning their connected device strategies and work together. Challenges pertaining to IoT adoption remain, across both enterprise and consumer segments, but we all agree IoT offers a sizeable opportunity.

Russell Gyurek, director of the IoT CTO Group at Cisco, who participated in the IoT ecosystem panel said it is clear “that while IoT has become a mainstream topic across a number of sectors and verticals, end user concerns are hampering adoption in some areas, namely, perceived value in association to cost, security and privacy, and implementation complexity.”

“Cisco is actively engaged across the market ecosystem to resolve these issues and drive the realisation of IoT value.”

There was a clear recognition across the panel participants that ecosystem collaboration is key to realising IoT value. So what are my key takeaways from this year’s show?

Coming together to simplify the smart home
Once again we saw a vast array of connected consumer products being announced, from pillows to panties! Whether or not these represent realistic use cases which create value is up for debate. This year certain smart home devices were omnipresent and very much support our view on how the market is developing. I saw a plethora of security/surveillance cameras scattered throughout the show, with smart lighting (bulbs, light strips and switches) and smart door locks not far behind.

Hundreds of manufacturers are competing using dedicated applications, platforms and various connectivity protocols. While smart speakers have been trying to address integration concerns, creating ecosystems around virtual assistants (such as Amazon’s Alexa) has led to a largely bifurcated market depending on your choice of voice assistant and the lack of true interoperability has stubbornly remained. This is a widely recognised issue, though, and initiatives around standardisation and security (Connected Home over IP and Open Connectivity Foundation) echoed throughout the show. This signposts that major manufacturers are coming together to work on standards under the shared belief that devices should come with privacy and security built in from day one, but also be able to seamlessly integrate with each other.

This will deliver clear benefits to consumers and developers alike. It also addresses some of the abovementioned consumer barriers and concerns. With big tech now focusing on interoperability within the home, an interesting challenge to telecoms operators is whether or not they can use this to their advantage and deliver services OTT in what could prove to be an interesting role reversal.

Health matters… even more
The focus in 2019 on wearables and sleep was extended this year to include medical sensors for home diagnostics and monitoring to measure blood glucose, fertility, arrhythmia, blood oxygen and, in some cases even communicate with health professionals. We see this category growing in the future as increasing proportions of the society use medically prescribed devices to manage chronic diseases. 2020 is also the first year that sex tech officially made it onto the show floor – possibly an attempt to right the wrongs of the prior running.

Vehicles, present and future
Ever popular, next generation vehicle technology took over an entire hall again this year hosting concept cars and flying taxis. In addition to the usual suspects, players not typically associated with auto tech such as Panasonic, Sony and LG Electronics also showcased how their technology will feature in the cars we will all be darting around in soon.

Data and AI
An omnipresent topic at events these days, and growing in importance as more and more devices are being connected. After all, IoT is all about data and the value it generates. Vendors are looking to create services and experiences: cases in point are LG Electronics’ vision of “everywhere is home” and Samsung announcing this as the “age of experience”. Both these highlighted the importance of AI in creating personalised experiences to make our lives more convenient.

AI also derives value beyond the consumer realm; Omron displayed FORPHEUS, AI-equipped robotic table tennis tutor capable of emotional intelligence to motivate the player. John Deere showed how it leverages AI to power its See and Spray technology to differentiate between weeds and crops. It is worth noting, though, that 95 per cent of the AI compute required is on-board. As this becomes the norm for industries such as farming, the case for edge compute could really start to make sense.

IoT is not just about devices being connected, it is about the benefits it delivers to end-users, be it consumer or enterprise. CES 2020 proved that the industry has started to move in the right direction.