Intelligence Brief: What is hot and not in IoT? – Mobile World Live

Intelligence Brief: What is hot and not in IoT?

Our new IoT connections forecast to end-2025 is coming out soon. The top line figures haven’t changed much (our 2018 prediction was 25.2 billion connections by the end of the period versus 24.6 billion in the 2019 edition). But it would be a mistake to think of this as just another forecast refresh (see chart, below, click to enlarge). 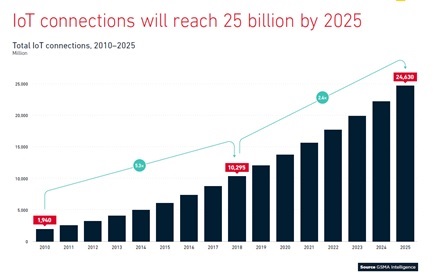 Alongside a multitude of analyst hours spent updating assumptions, each year we crunch the IoT adoption data coming from our demand-side surveys covering 36,000 consumers and nearly 2,800 enterprises.

But before I share some of the key learnings/differences, there is one very important question: what is IoT?

This might seem like a strange question to kick things off with. But let me explain why it is so super important to clarify.

From an IoT analyst’s vantage point, it is easy to assume that everyone knows what IoT is. That is not the case. We recently asked IoT decision makers a simple question: do you think the following are, or are not, examples of IoT?

The same share of respondents think neither a connected laptop or a vehicle telematics solution counts as IoT (25 per cent). Some are clearly right. Some are clearly wrong. In either case, it’s evident there is a lot of confusion out there.

Back to the point of IoT forecasts. So, what has or hasn’t changed in the world of IoT?

The rise of enterprise
That hasn’t changed. We still forecast the enterprise segment will be the principal driver of future IoT deployments. By 2025, we predict 13.3 billion IoT connections (54 per cent of the total) will come from the enterprise sector. Slightly lower than previously, accounting for slower adoption of IoT in smart buildings (still the largest segment). We see smart manufacturing as the fastest-growing segment, across not only enterprise but also all IoT segments, driven by Industry 4.0 initiatives and manufacturers deploying IoT to automate production, streamline operations and increase productivity.

Digital transformation
This term is surely embedding itself as a way to describe what we used to call IoT. Our survey shows one-in-six enterprises are in fact deploying IoT as part of wider transformational agendas. While, for sure, there are vertical/industry specific dynamics in place, many enterprise journeys are quite similar. Enterprises of all sizes deploy IoT solutions to: a) connect assets; b) collect data; c) analyse (make use of data); and d) improve their business (processes, products et cetera), then go through this virtuous cycle again and again. The primary goal is to increase productivity, achieve cost savings/process efficiency and, through better insights, to offer tailored products/services. This hasn’t changed.

APAC in the lead
Overall, Asia Pacific will account for 47 per cent of all IoT connections by 2025 (compared with 44 per cent previously forecast), on the back of stronger than previously expected adoption of IoT among enterprises. China leads the way, for example, it accounts for over half of all smart electricity meters, with 554 million installed in 2018.

Connected devices part of everyday life
A growing number of consumer IoT devices have connectivity built in by default. It is very hard to buy a TV that isn’t smart, or any other consumer electronic device for that matter. However, when it comes to consumer electronics, we have observed device consolidation due to the popularity of streaming. Net consumer electronics as a category is still growing, but within it personal and home entertainment are declining.

Wrists as prime real estate
The smartwatch and wrist-worn fitness tracker categories are merging, for example Apple Watch can offer much of the functionality of a Fitbit. There could be even more developments with Google’s recent move to acquire Fitbit, leading to the Android proposition for smartwatches. For now, we have revised down our forecast for fitness trackers.

Not as many smart vehicles
New car sales are slowing down: this influences the installed base of those which will come with connectivity either embedded or brought in. Some of the promising use cases such as usage-based insurance, thus, are still limited to a few markets and smartphone-based alternatives limit the growth potential. Similarly, we see a disappearance of personal navigation devices. Still, we forecast 1.1 billion, which is sizeable.

Similar barriers and challenges
Asking those consumers who don’t have any smart/connected devices in their home gives some clear reasons on the rationale. The top three reasons: don’t see any benefits in using them (therefore value); too expensive (cost); and privacy concerns. The top three challenges for enterprises which haven’t deployed IoT: cost of implementation; lack of in-house skills; and security and data privacy concerns. So two-out-of-three are pretty much the same: the key takeaway is cost and security matters. A lot.

These are just some of the top-level findings from our latest report. As always the IoT market is fast moving and we are keeping a close eye on market developments.