For an IoT industry analyst, CES is a real treat. 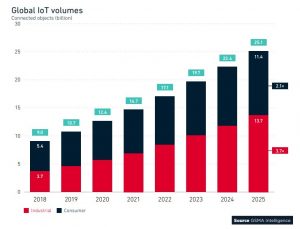 Naturally, some connected devices on show left me scratching my head (connected underwear, anyone?) But I look at it through the lens of how we segment IoT at GSMA Intelligence: consumer vs. industrial or enterprise opportunities. We see both being massive markets (see chart, click to enlarge), but the latter growing at a faster rate. However, after wandering through the CES halls for a few days, I came to a few new conclusions about consumer tech. More than just consumer tech, though, they tell us something about IoT as a whole.

IoT is meaningless without data and analytics. Ginni Rometty, IBM CEO, dubbed AI as the “world’s greatest natural resource” during her keynote, and a technology that will empower revolutions across multiple IoT segments from smart cities to healthcare, transportation to robotics. There’s a lot to digest there… and I fully agree. We often highlight the fact that connecting devices alone isn’t what IoT is about. The real value comes from IoT data translated into actionable insights. So I was glad to hear that event organiser CTA recognised that as well, announcing a new megatrend at CES Unveiled: the data age. An age where consumer choices or business decisions are reached and supported by data. This was an underlying narrative during the show – how to translate sensor intelligence into tangible results. As one example, John Deere, a CES first time exhibitor, showcased just that. It brought its connected harvester to the showfloor and I even managed to hitch a ride in a self-driving tractor. Pretty impressive. The reasons behind implementing precision farming are clear, go beyond cost saving and yield increase to feeding our ever growing population. John Deere achieves this via a mix of connectivity and data analytics.

Voice brings the smart home together. Google’s presence at CES was overwhelming. “Hey Google” was plastered all over the monorail, a Google “fun ride” was just in front of CES’ central hall, and a slew of device manufacturers added the “Works with Google Assistant” sticker. Google also had people in lots of partner booths. Why’s that important? It flags that Google is spending some serious bucks on integrating with partners. Fear not, Amazon Alexa was not forgotten and added to new products, quite often alongside Google. As a result of increased reach, according to GSMA Intelligence’s new Consumer Survey, smart speakers’ household adoption has doubled to 15-20% across the US/Western Europe. Although (typically) absent from the show, Apple made its way into the spotlight as well through new Home Kit partnerships. Why is this important? One simple reason: smart speakers have emerged as the prominent voice-control computing platform for smart homes, leading to the ‘resurrection’ of voice as a user interface. An open ecosystem offers the ability to scale up and extend market reach.

Ageing baby boomers get connected. Independent/assisted living solutions were on full display at CES this year and went beyond just alerts based on basic connectivity. The ultimate goal is to allow seniors to maintain independence for as long as possible, using a combination of wearables, beacons, sensors, and cameras with an AI overlay. Using AI powered platforms alongside sensors adds value and helps to manage daily activities. For example, Hive Link Connected Care learns a seniors’ routine using multiple connected devices and alerts the caregiver when an anomaly and/or inactivity occurs. Similarly, CarePredict monitors ADL (Activities of Daily Living), training neural nets based on individual behaviour and enabling preventative actions once changes in daily activities have been detected. Such services can also be an add-on to the carer’s existing smart home security service, e.g. Wellcam, an Alarm.com service. This is still a nascent market with “a trial and error” approach to service provision. The addressable market is rather large – according to the United Nations there are almost 1 billion people aged 60+ globally and this will double by 2050 to almost 2.1 billion, equivalent to 13% and 21%, respectively, of the total population.

Wearables get healthier. Omron is a great example. The company essentially miniaturised a traditional blood pressure monitor and turned it into a wrist watch, Omron HeartGuide. It isn’t pretty but that isn’t its purpose. Managing medical conditions using medical grade devices and analysing data via a secure platform with a built-in AI engine, which then reports to a physician for a diagnosis and treatment, is an ultimate goal. This can result in reduction in healthcare spend (which accounted for 18% of GDP in the US in 2017). Net net, it delivers a real and measurable value. Understandably, the US is an outlier here – private insurance offers more opportunity for health device adoption to manage costs. Other barriers to adoption include behaviour (patient and clinician) as well as reimbursement structure and regulation. But we’re seeing a real definitive shift towards a more preventative approach to healthcare – and wearables can help.

My favourite new tagline. #LikeaBosch is the tagline of a new global image campaign to highlight the company’s capabilities to deliver connected experiences. It was funny. It also drove home a message that there are still things that can be connected and interconnected to deliver better experiences. Should they be? Well that’s another question. Probably not everyone needs a connected coffee machine or lawnmower.