Intelligence Brief: Is the media market all sewn up? - Mobile World Live

Intelligence Brief: Is the media market all sewn up? - Mobile World Live

Intelligence Brief: Is the media market all sewn up?

This month saw the launches of the much-anticipated online video subscription platforms Apple TV+ and Disney+, set just two weeks apart from each other. AT&T lined up the launch of its contender, HBO Max, to be taking place within six months. The timing of these launches is not coincidental. The respective companies see the present period as decisive in taking a strong footing in the media landscape of tomorrow.

What does that landscape look like? In this view of the future, consumers will enjoy a comprehensive content library split among several services as major media companies move towards exclusive distribution through their own OTT platforms. This is no longer just a prediction, the current launches represent significant efforts (bets?) to realise this vision.

Netflix, of course, remains at the forefront of the OTT battle. With this position, however, comes the expectation from its viewership of having a go-to library, available in one subscription. Netflix has historically won popularity by being able to offer broad range of licensed content, but the company is now finding this promise progressively more difficult to deliver.

In the bid for direct distribution, media holders continue to take their content off Netflix. This includes some of the most-streamed titles on the service. Disney’s content, for example, includes the highly desired titles of Marvel, Pixar, Lucasfillm, and 20th Century Fox. In preparation for its launch, the media giant pulled the vast majority of licensing agreements with Netflix in favour of distributing it directly through Disney+ and its majority-controlled Hulu.

AT&T’s upcoming HBO Max platform, meanwhile, will have productions from WarnerMedia as well as HBO itself. The latter has never been available on Netflix. WarnerMedia most prominently owns the rights for the TV show Friends, for which Netflix has been paying an astronomical fee, signifying the importance it played for the service.

In house
Netflix long ago recognised the present challenge and responded by investing more of its spending on original productions. The company owns perpetual rights for self-produced content and accumulated a significant library. The future for the company is thus beginning to look less like a technology business and more like any other media entertainment one, as the industry enters a level playing field.

But if the growing popularity of OTT entrants creates pressures for Netflix, the future will still be limited to a handful of well-established platforms which have been able to pull together compelling content while also solving the technical challenges in setting out infrastructure for distribution on a mass scale (see chart, below, click to enlarge). 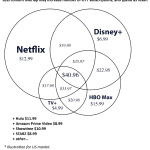 Again, take Netflix as an example. It has had years to develop its platform, offering some of the most lucrative developer salaries in Silicon Valley. It is thus currently able to offer unparalleled quality, reliability, and bandwidth requirements compared with competitors. Amazon Prime Video, meanwhile, enjoys a particularly great synergy with AWS, Amazon’s cloud computing business. The company continually sought to capitalise on this unique strength, achieving the feat of streaming a live sport event to 18 million viewers simultaneously. Disney, too, made a staggering investment of a $2.6 billion for a controlling stake in BAMTech, a video streaming technology company, two years prior to the launch of its platform.

Home delivery
The keen pursuit by media companies to capitalise on their content, now forms the view of a highly fragmented industry. The services will have little overlap between their content offers, and consumers will be limited to particular studio productions when signing up for a platform. The launch of new services is a costly investment for the parent companies, but not only in aggregating the content offer itself. The potentially greatest challenge for an established media company, now lies in realising the back-end infrastructure which ensures reliable and high quality distribution.

This forms a high barrier to entry, which rare challengers will be able to overcome in competition for the global market. Put another way, failing to make sufficient investment in the platform component today will leave media business with significant restraints in the future.