With 5G continuing to dominate industry headlines, it may come as a surprise to learn that the world’s ninth largest mobile market, Bangladesh, only recently launched 4G services. With over 85 million mobile users, however, it would be imprudent to understate the impressive development of the mobile industry and the critical role it plays in Bangladesh.

For one, the nascent but burgeoning digital ecosystem in the country has been underpinned by large-scale and rapid adoption of mobile services since the turn of the century: mobile subscriber penetration levels in Bangladesh have risen from just over 1 per cent in 2003 to half the population at the end of 2017, GSMA Intelligence data shows.

Further, the much anticipated launch of 4G services in February 2018 heralded an important step in the evolution of Bangladesh’s mobile industry, enabling faster and more reliable internet connectivity, and offering numerous consumer, economic and social benefits. When combined with the young and dynamic population in Bangladesh, the upgrade to mobile broadband networks also creates sizeable opportunities for start-ups and investors.

Take the case of Pathao, a Dhaka-based motorbike taxi-hailing service founded in 2015: last month it raised in the region of $10 million, in an investment round led by Indonesian taxi-hailing service Go-Jek, at a valuation in excess of $100 million. From on-demand motorbike taxi services to food delivery, as Pathao expands into new cities it has continued to diversify its services and is now developing a mobile wallet app aimed at reducing customers’ reliance on cash payments, which remains the main payment method in the country.

But not only does mobile connectivity continue to transform the ways in which the Bangladeshi society functions and interacts, it is fundamental to socio-economic development and the achievement of Bangladesh’s national development plan (Vision 2021), as well as the UN’s Sustainable Development Goals (SDGs). Mobile services are helping to address major challenges facing Bangladesh, from population growth and rapid urbanisation to poverty, inequality, natural disasters and climate change. Just last week, an app being launched by children’s charity Plan International and the Bangladesh government was cited as a game-changer in the ongoing fight against child marriage, an area where Bangladesh has amongst the highest rates in the world.

So, after almost three months since services were launched, how come the initial customer response to 4G has been dubbed tepid?

A 2G market: Bangladesh is a predominantly 2G, prepaid mobile market, with some of the lowest ARPU levels in the world. Only one-in-five Bangladeshis subscribed to mobile internet services in 2017, despite 3G networks covering more than 90 per cent of the population. Therefore, while part of the 4G adoption issues relate to customer reluctance to upgrade their 3G SIM cards, the fact remains there is a significant digital divide in Bangladesh.

Usability, skills and content: From a consumer perspective, other factors aside from costs, such as basic and digital literacy, usability, skills (for example digital skills and confidence in learning to use basic mobile phone functions), as well as the availability of locally-available relevant content, are important barriers too.

Infrastructure: More broadly, as the 4G rollout continues, tax and spectrum barriers in Bangladesh constrain mobile operators’ ability to invest in network coverage and expansion, which can have adverse effects on consumers. As mobile broadband adoption scales over time, the increased data demand will further strain network capacity, inevitably requiring even greater access to affordable spectrum. Without this, quality of service for users will suffer, impeding the adoption of, and engagement with, digital services.

So given this, what’s the outlook for 4G, and can Bangladesh continue to achieve its goals? 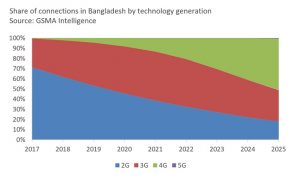 First, it’s important to note the 3G lifecycle still has a long way to go before reaching maturity. As we can see in the accompanying chart (click to enlarge), 3G connections are only expected to overtake 2G connections in 2020, with 4G adoption gradually accelerating out to 2025, at which point 4G is expected to represent half of total connections thanks to a combination of gradually improving affordability (driven by falling smartphone prices) and greater 4G network coverage.

While the slow transition to mobile broadband technology in Bangladesh is, in part, a matter of timing, ultimately, the pace at which the digital divide will be reduced will depend on enabling a regulatory environment which is conducive to investment and helping to alleviate affordability barriers on the part of consumers. Nevertheless, by helping to promote digital inclusion and support the delivery of essential services, there is no question the mobile industry will continue to make a vital contribution to the economy of Bangladesh and achievement of its Vision 2021 as well as the SDGs.

For further information, GSMA Intelligence recently published the second part of a deep dive report into the mobile industry of Bangladesh which can be found by following this link here.