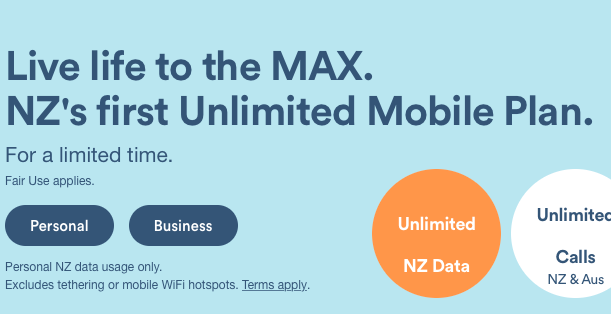 New Zealand’s mobile operators are taking a page out of the industry’s 3G pricing playbook as they move to re-visit unlimited, or in the case of the latest announcement, data plans without a cap.

On 3 April the country’s third largest mobile operator 2degrees introduced what it said is the country’s first unlimited mobile data plan. In a move designed to “test the waters”, the operator said it is offering customers unlimited mobile data, calling and text for a flat rate of NZD129 ($89.92) per month. It noted its fair use policy applies and the offer is only for a limited time. We’ve heard that before.

Three days later, Spark said it will soon roll out “mobile plans that allow customers to use their mobiles without restriction” by providing data without a cap, unlimited voice calling and unlimited texting for NZD129.99 a month. It said the new plans will be available after Easter and customers can order online in advance of the launch. The accountants are busy crunching the numbers after the marketing department said “we have to do something” in response to its rival’s all-you-can-eat plan.

Taking issue with 2degrees’ use of the word ‘unlimited’, Spark asks how can the plan be unlimited when there is a fair use limit? It said in a press release: “we believe it leaves customers with as many questions as answers”. It also took a swipe at US mobile players’ so-called unlimited plans, which it said actually limit customers in a range of ways.

2degree’s fair use policy (which takes three clicks to bring up) states: “Use of the services must be fair, reasonable and not excessive, as reasonably determined by us by reference to average and/or estimated typical customer usage of the services.” Of course how that is defined is open to its interpretation – what is reasonable to one user could be deemed excessive by the operator. The policy also doesn’t allow tethering.

Spark definitely has a point when it asks what experience customers will receive once 2degrees thinks they have used too much data?

Simple to understand
To remedy this, Spark says its Freedom plans give customers “most of the benefits of an ‘unlimited approach’ but are clear and simple to understand”. The first 22GB of data per month runs at full speed on its network, after which Spark may reduce the speed to manage the network and protect other customers’ experience.

While Spark aims to be more transparent by spelling out what no cap means, it fails to indicate what the reduced speed may be, or when or why it may be applied, which leaves customers with similar questions as they’d have with fair use policies.

At NZD5.90 per gigabyte (based on 22GB of data at full speed), Spark’s new plan is significantly cheaper than its existing top-tier data offers, with the price of a gigabyte roughly calculated at NZD10.67 to NZD15.00 (not including voice and text). 2degrees’ unlimited offer (assuming customers use 20GB a month) is at least 20 per cent lower than its higher-end plans, which come to NZD8.00 to NZD8.57 per gigabyte.

Phil Marshall, chief research officer at Tolaga Research, told Mobile World Live the trend isn’t limited to New Zealand. “This is occurring globally and capitalising on the increased capacity of 4G. Interestingly, it is slowing the rate of traffic offload to Wi-Fi.”

Surely it can’t be long before market leader Vodafone NZ follows up with its own unlimited offers, with additional discounts almost certain to follow at some point… just when ARPU was showing signs of rebounding.