For the last eight years every February the Mobile World Live team has produced Mobile World Live TV – a huge operation that broadcasts every major development of the five-day event across the Fira Gran Via venue, throughout the city of Barcelona on a local television channel and globally via an online stream.

We’ve got bigger (and hopefully better) each year, but our goal has always been the same; to bring the excitement of the show to wherever you are. Every device launch, every keynote session and every major industry talking point is covered by our team of reporters.

So what’s new this year?

First up, we’re excited to announce a partnership with Samsung Networks that will see Mobile World Live TV broadcast throughout the week by 5G technology! Well, we’ve been talking about the next-gen tech for (what seems like at least ‘5’) years, so for 2019’s broadcast we feel it is the perfect time to put the technology through its paces. We’re ironing out the technical details now and we’re sure it’s some kind of “first” – we’re just checking with our lawyers on what we can claim…!

Complementing the GSMA’s focus on boosting female representation at MWC19 Barcelona (around 30 per cent of this year’s conference speakers will be women, with this number increasing to 32 per cent for the keynotes), Mobile World Live TV will also ensure a fairer balance of female guests in this year’s broadcast. We’re aiming for at least one female speaker on every one of our 20 studio panels across the week, with one panel focused exclusively on the topic of Women4Tech.

Thanks to the magic of 4G technology, this year we’ll also be spending a lot more time reporting live from the showfloor; expect to see us broadcast from the major stands, including Ericsson, Huawei and many others. 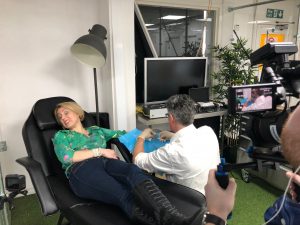 Co-host Sasha Twining has something new up her sleeve this year… last month she had a NFC microchip implanted in her hand (pictured, left). So where better to test this out than the world’s biggest mobile tech show…?

Of course, we’re back with some of the favourites: after last year’s success, we’re delighted to welcome presenter David McClelland again as he covers every inch of the 4YFN startup event at Fira Montjuic, bringing us an hour of dedicated 4YFN coverage every day.

We will also reveal the winners of various GLOMO Awards on MWL TV during Monday and Tuesday, with our new host Larry Madowo.

And of course there will be more than 30 studio interviews with the biggest names across the mobile ecosystem – this year we want you to play your part in Mobile World Live TV by suggesting questions using #MWLTV. We’ll be paying close attention to the hashtag all week and discussing the most interesting tweets live on air.