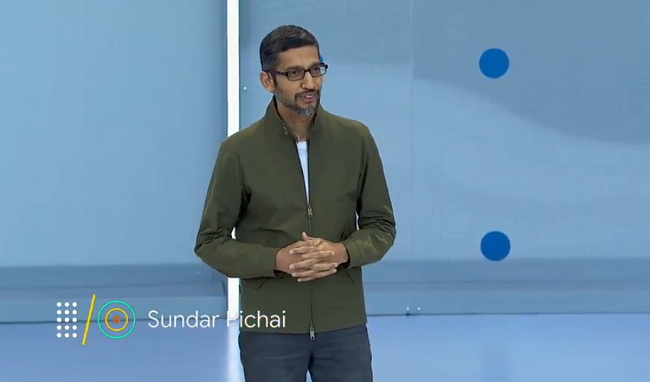 This may or may not be a small indicator of its impact, but I received a video of Google CEO Sundar Pichai (pictured) demoing Duplex four times from four different (non-techy) people on WhatsApp last week.

That same four-minute snippet of content has, through numerous video uploads, collectively racked up millions of views on YouTube.

Indeed, the worldwide debut of Google Duplex, a new artificial-intelligence (AI)-based conversation capability which allows Google Assistant to call businesses on behalf of users, was the eyebrow raising moment during the company’s annual I/O event this year.

During the demo, if you haven’t seen it, Google’s Assistant successfully mimicked the human voice; filler words like um and ah; and appropriate pauses to communicate with humans at the other end of a phone (yes, discussing AI in this blog means I will have to specify humans in their own right).

In one of two pre-recorded phone calls, showed off by Pichai, Assistant successfully set up a hair appointment for a fictitious user during a minute-long conversation: the second showed how the AI was able to skirt around common language and understanding difficulties during a request to reserve a table for dinner.

Most importantly, which we will come to later, both humans on the other end of the phone appeared to have no idea they were communicating with what is effectively a bot.

Real-world use
To me, this demo was an indicator of how a smart assistant, whether it is Google’s, Amazon’s Alexa or Apple’s Siri, can provide real-world use cases.

Just two months ago, I penned a blog discussing the challenges smart speakers face in going beyond the “gadget effect” and ensuring they provide more uses than simply allowing people to find out the weather or play a song through the powerful medium of voice.

Duplex, which is currently still in the works, showed Google Assistant making use of DeepMind’s WaveNet software. This was developed to be familiar with different conversation styles, and be able to understand human sounds and mimic them. The goal of the software is to allow people to have “natural conversations” with such technology.

And the beauty of Duplex lies in it seemingly being able to perform tasks by using data collected from the user and making that actionable.

In theory, this enables the person wanting the appointment or the reservation to get on with whatever they would rather be doing.

After all, we’ve heard it for years, haven’t we? AI will allow people to prioritise their time and focus on more important tasks. Google provided a real-life example.

But not everyone was impressed.

Google was forced to release a statement addressing something of an outcry on social media, with many taking issue with the fact that the people on the end of the phone call were essentially tricked by the Assistant into believing they were conversing with a fellow member of the human race.

Horrifying
Describing the demo as “horrifying” on Twitter, associate professor at the University of North Carolina and technology critic Zeynep Tufekci slammed Google for “deliberate deception”, while stating she was surprised WaveNet had been allowed to be presented to the public in the first place.

“Silicon Valley is ethically lost, rudderless and has not learned a thing,” she said.

She was not alone.

Bloomberg cited Stewart Brand, an author who writes about the responsibility of advancing technology, who stated “successful spoofing of any kind destroys trust”.

Google swiftly responded to the criticism by stating it would warn humans when they are interacting with the Duplex system once it launches, with the aim of designing the feature “with disclosure built in”.

The company added the technology was still in its early stages and it will incorporate feedback as it develops the system into a real-world product.

Speaking to Mobile World Live, Sebastian Menutti, senior industry analyst covering digital transformation at Frost and Sullivan, suggested Google made a mistake by not clarifying its position around disclosure, as most people will be thinking they are talking to a human rather than a bot “and they would be easily deceived”.

“Maybe these concerns wouldn’t have been so strong [if they had provided disclosure]. However, it is healthy and necessary that we have this type of discussion around AI as they are likely to become more common in the next few years,” he added.

Would you hang up on Google?
Google’s decision to provide disclosure to the other side of the conversation is very much addressing societal concerns, but does it in effect put the technology at risk of being unable to fulfil its very purpose?

But on the other side of the conversation, how likely are you to be willing to interact with a bot when you know it’s a bot, even if it is clever enough to sound like a human?

“It depends on the type of interaction,” Menutti ventured. “I think people came to dislike current IVR [Interactive Voice Response] systems as they can be tedious and time-consuming so they usually try to avoid them. But, modern virtual assistants bring more intelligence and efficiency to the equation, and it may be preferable to dealing with a person, specifically in transaction interactions and routing tasks such as making an appointment or checking information.”

Conversely, Menutti added in some cases “people are likely to prefer to speak with a human,” noting certain interactions require talking to “someone with empathy, emotional intelligence and common sense”.

Scott Huffman, an executive on Google’s Assistant team, told Bloomberg the response to Duplex had been mixed, with some people “blown away” while others harboured concerns.

Giving the Assistant a robotic voice and making it clear the human was interacting with a machine was an option but “people will probably hang up”, he added.

I think I would too.

Alternatively, the Assistant could say: “I’m the Google Assistant and I’m calling for a client,” suggested Huffman. Would I still hang up? Maybe not.

What is for sure, Google’s humans have some thinking to do.

Ultimately, the company gave us one glimpse into what could be achieved by AI. But with some of the negative reaction in mind, is the world still not ready for this type of intelligence?

“AI is gradually starting to penetrate our lives and our economy. Whether we are ready or not, we should be,” said Menutti.