BlackBerry’s CEO opens up on mistakes and future strategy

BlackBerry’s CEO opens up on mistakes and future strategy

BlackBerry CEO opens up on mistakes and future strategy 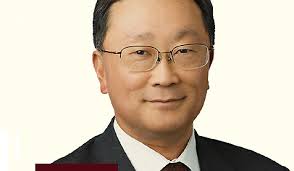 Asked when he would know if his remedies would succeed, Chen answered: “If all actions are successful then [we will] get back into break-even in this fiscal year and profit in the next fiscal year. I am steadfast in going after that.”

This was a reaffirmation that targets will be achieved in some part through BlackBerry’s enterprise business, an area where the company is putting more focus, including a new version of its BES 12 platform, a subscription model for businesses using BBM, a hook-up with SAP and simplified pricing for corporate customers.

In fact, Chen was willing to acknowledge past mistakes, prior to his time at the company of course. Asked if too much emphasis and been put on the consumer market, Chen said: “I think there is a certain truth to that statement. Not about leaving enterprise before my time but we were spread too thin. Not everything was lined up to be that thin.”

The first smartphone codenamed Jakarta, born of its Foxconn hookup, will launch in April.  The deal was only signed in December.

As previously reported BlackBerry will first launch the sub-$200 3G device called the Z3 in Indonesia followed by other parts of the region. A global LTE version will be available “at some point in the future”.

A second smartphone from the Foxconn alliance called the Q20 will be released by the end of the year, with an emphasis on its Qwerty keyboard.

Chen was quizzed in the wake of Facebook’s $19 billion acquisition of What’sApp about BlackBerry’s own messaging service, BBM. With 85 million active users, BBM is way short of WhatsApp’s 425 million figure although Chen talked up how “serious” they were. That is borne of the enterprise background of many BBM users, he said.

The company also announced the eBBM Suite, a new family of products and services to provide “enterprise-class mobile messaging”, in what it hopes will be a mean to monetise the messaging service.