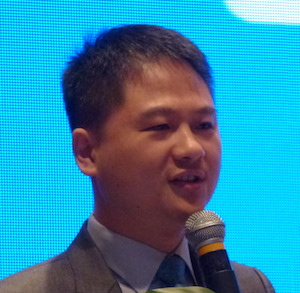 ZTE GLOBAL ANALYST CONFERENCE, SHANGHAI: Chinese equipment and device maker ZTE once again has said it aims to become a top-three smartphone vendor in key global markets, this time pushing back its target date to 2020 while aiming to return to the top three in China within three years.

The Shenzhen-based company is making an aggressive branding push over the next few years to put it in a position to break into the top three in the US and top European and Asia markets, Zeng Zuezhong (pictured), CEO of ZTE’s terminal business, said in his keynote this morning. It also aims to be the number 1 Chinese brand in overseas markets by 2020.

“We are investing heavily to expand our brand recognition, collaborating with internet players like Baidu and Google, localising our offering, and shifting from a B2B strategy to a B2C strategy.”

However, this isn’t the first time the company has revealed such aspirations; more than two years ago the company went public with the ambition.

Worringly, it has actually lost market share over the past few years as fast-rising Xiaomi, Lenovo (now combined with Motorola) and Huawei have moved up the rankings at its expense. In Q3 2012 it moved into the number 4 position in the global smartphone market with a 4.1 per cent share, but has since fallen out of the top five.

New smartphone
Zeng also teased the audience by saying a new flagship smartphone will be coming out soon.

He noted that its average selling price rose 8.2 per cent in the first six months of the year, while open market sales accounted for 46 per cent of total unit sales, a clear sign of its declining reliance on operator channels.

Taking a page out of rival Xiaomi’s book, Zeng said ZTE is reaching out to customers for feedback to improve the user experience. This is part of its “smart+” strategy, introduced last year, to be more customer centric and link its devices with the cloud, big data and the Internet of Things.

He said it is looking for user input from customers on everything from new product design to marketing planning. Its goal is for 80 per cent of innovation to be driven by consumers.