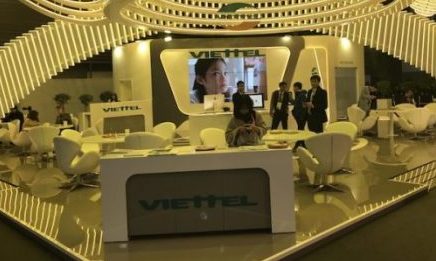 Its profit in the quarter increased 8 per cent year-on-year to VND1.34 trillion ($57.5 million), with revenue rising 5 per cent to VND4.43 trillion.

But the operator posted a net loss of VND812 billion for first nine months of the year compared with a profit of nearly VND3 trillion in the same period of 2017, due to heavy investment in Mytel, a joint venture with a consortium of local companies in Myanmar.

The operation signed up 3.2 million subscribers in Q3 and Viettel aims to break even in 24 month to 30 months, the newspaper said.

Mytel started operations in June after being awarded the country’s fourth mobile licence in January 2017.

Viettel’s operation in Cameroon, Tanzania, Mozambique and Burundi accounted for 45 per cent of total revenue of VND12.4 trillion in the January to September period, which increased 5 per cent year-on-year. Its ventures in Asia (Cambodia, East Timor, Laos and Myanmar) made up 37 per cent, while its units in Haiti and Peru accounted for 13.4 per cent.

The operator debuted on a domestic stock exchange in September and outlined plans to focus on providing more next-generation telecoms services. It offers 4G services in all markets except Cameroon.

Viettel Global, established in 2016, is the international subsidiary of Viettel Group, which also owns Viettel Telecom, the largest mobile player in Vietnam.