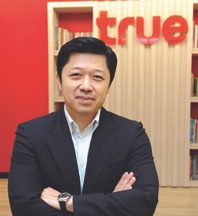 Vichaow Rakphongphairoj and Adhiruth Thothaveesansuk were also appointed co-presidents at True. Vichaow is responsible for the operator’s commercial business, including mobile, broadband and pay-TV, while Adhiruth will take charge of the operations side covering everything IT, networks and customer service, the The Nation reported.

Suphachai was recently named CEO of Charoen Pokphand (CP) Group, one of the largest conglomerates in Asia and the parent company of True with a 56 per cent stake. Suphachai, who is also vice chairman of CP Group, is a son of the the group’s chairman, Dhanin Chearavanont, Thailand’s richest person.

True Mobile’s market share increased by 3 percentage points to 25 per cent year-on-year since Q4 2015. It trails number two dtac by just 2 percentage points and market leader AIS by 20 points, according to GSMA Intelligence.