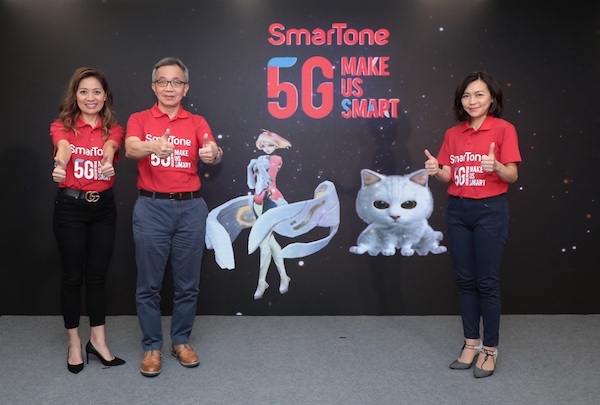 The operator didn’t disclose the number of 5G-compatible 5G base stations deployed, but CTO Stephen Chau (pictured, second left) said it had 70 per cent population coverage at launch and targeted citywide coverage by mid-2021.

Multi-band approach
In a statement, SmarTone said it adopted an integrated approach combining high-, mid- and low-spectrum bands to build a robust network, with 3.5GHz spectrum to be progressively deployed across the territory.

SmarTone CEO Anna Yip (pictured, far right) said 5G will benefit both consumers and enterprises, and will be one of the key enablers for Hong Kong’s smart city development. She claimed its 5G network offered the widest network coverage both indoors and outdoors, and it introduced a range of services and applications for different customer segments and enterprises.

The operator welcomed the Office of the Communications Authority’s subsidy scheme introduced in early May to encourage the rollout of 5G services, noting it will help accelerate enterprises’ 5G deployment plans.

In March, it named Ericsson as its sole supplier for 5G gear, which follows it awarding the vendor a five-year contract for all core and radio access network equipment in November 2016.

For HKD398 per month, the operator offers customers 80GB of data, 2GB of Greater Bay Area roaming data with a China mobile number, and additional SIM cards if needed.

Subscribe to our daily newsletter Back
Previous ArticleBharti Telecom raises $1.1B from Airtel stake sale
Next ArticleIntelligence Brief: Covid-19 and what it means for IoT