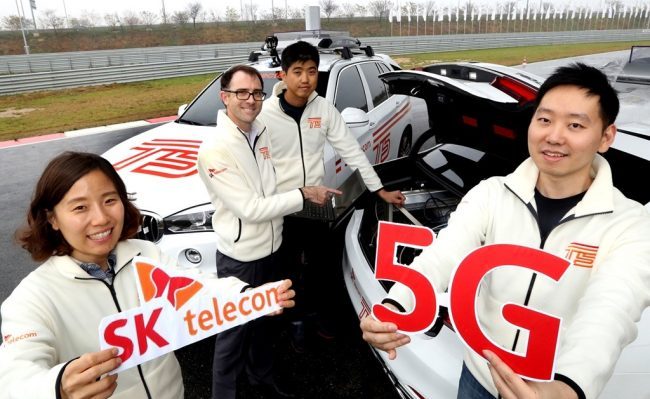 The ‘5G’ trial network covers all the tracks inside the driving centre, which spans an area of 240,000 square metres and supports peak data rates of more than 20Gb/s with sub-millisecond latency, SKT said.

Using a combination of ‘5G’ and vehicle-to-everything (V2X) technologies, SKT’s ‘T5’ connected car improves road safety and the driving experience by supporting ultra-low latency communication between vehicles and the surrounding environment, it said in a statement. For the demonstration, SKT worked with BMW Group Korea to install 5G terminals in two BMW vehicles.

SKT demonstrated T5’s capability to observe road conditions enabled by a video recognition camera installed in the vehicle to provide notifications and assisted-driving to drivers. In addition, the operator says it transmitted, in real time over the network, ultra-high-definition (UHD) video taken by 4K cameras and a 360-degree camera installed both inside and outside of the vehicle to the control centre.

Despite SKT’s early claims, 5G isn’t expected to be officially ratified as a technology until 2018, with widespread commercial launches expected from 2020.