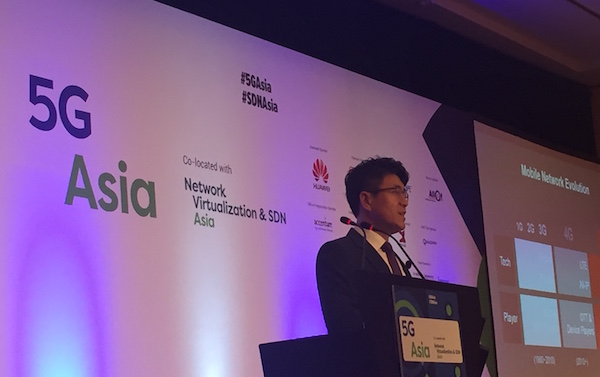 LIVE FROM 5G ASIA, SINGAPORE: The use cases and key drivers for 5G are far from clear, but South Korea’s SK Telecom is confident the wider ecosystem will develop killer apps of the future, which is a major reason for its aggressive 5G push.

Jin-Hyo Park, SVP and head of SK Telecom’s network technology R&D centre, said it’s far from certain what will be possible with 5G. “What will 5G bring? We don’t know, as the commercial launch isn’t coming until at least 2020. Right now we’re not sure what will be the main drivers – speed, latency, the experience…”

He recognised that telcos have a lot of homework to do to differentiate 5G from 4G. Each new mobile generation has had a key differentiator, with 3G offering video calling, 4G bringing the mobile internet and LTE-Advanced (LTE-A) ushering in media streaming, he said.

In addition, with each round of new technology, he said new players emerge and with 5G we’ll see more IT firms move into the ecosystem.

He is bullish on the opportunities in mission critical services, such as autonomous vehicles, which will require latency of less than 10ms. He said this low rate will be easy with 5G, but with LTE-Advanced, less than 50ms is not possible.

SK Telecom has a two-track 5G network strategy: an evolutionary path moving from LTE-A and the revolutionary one pushing the New Radio (NR) technology.

He talked up its 5G trials this year with Samsung focusing on mmWave, SDN-based distributed core networks with Nokia and small cell collaboration with Ericsson.