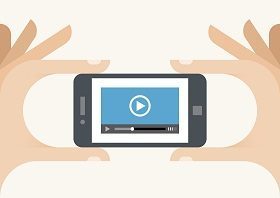 Mobile video ad revenue in China more than doubled over the past year to CNY6 billion ($860 million) in Q3 and accounted for nearly 60 per cent of total online video ad revenue, according to iResearch.

A year ago mobile video ads represented 44 per cent of online video ad revenue (see chart below, click to enlarge). 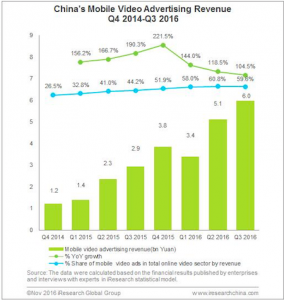 Online video ad revenue increased 51 per cent year-on-year in the quarter to just over CNY10 billion. The Beijing-based research firm expects ad revenue to maintain a high growth rate, even as the overall sector starts to slow.

The increase in high-quality content, including exclusive content like user-generated dramas and self-made variety shows, accelerated the development of paid video, which accounted for 19 per cent of total video revenue, iResearch said. Copyright distribution revenue accounted for 1 per cent of online video revenue in Q3, and other revenue (including terminal sale revenue, e-commerce revenue and game revenue) accounted for 25 per cent, which has been steady over the past five quarters.