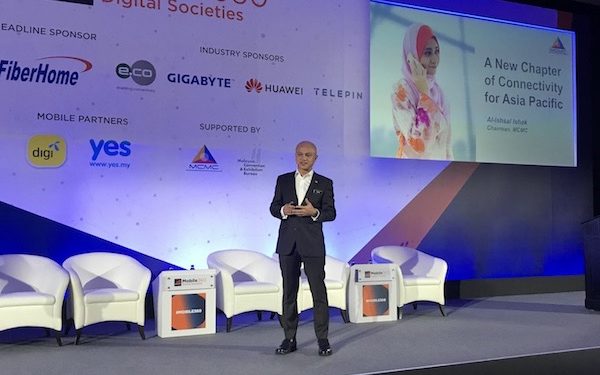 LIVE FROM MOBILE 360 DIGITAL SOCIETIES, KUALA LUMPUR: The chairman of Malaysia’s communications regulator credited progressive legislation and operators for fuelling a rapid national transformation, from being an internet laggard into one of Southeast Asia’s most competitive markets.

In a report released in September 2018, World Bank slated Malaysia for lagging in broadband coverage and adoption, along with a lack of competition because a single provider held a high market concentration.

Al-Ishsal Ishak (pictured), chairman of the Malaysian Communications and Multimedia Commission (MCMC), said it and the industry acted quickly, releasing a National Fibre and Connectivity Plan, and setting up a 5G task force a month later.

Despite the sharp price reductions, the total market capitalisation of five telecoms companies in the country increased 25 per cent between October 2018 and August 2019.

“We’ve proved in one year that nothing is impossible,” he said, adding the government now sees internet access is not a privilege or a luxury, but a necessity and an economic driver. “This is the first step and we need to learn. But we are well on the way.”

5G plan
The 5G task force will submit a final report to the ICT minister in the last quarter of the year. The timeline for commercial 5G launches is 2021 or 2022, with plans to start a 5G testbed and showcase in Q4 2019, which will run for six months.

A priority for the fibre plan was to accelerate network deployments. Top of the list was optimising spectrum allocation to enable introduction of high-speed services. The regulator is exploring assignments in six bands, and will start a public inquiry for the 700MHz, 2300MHz and 2600MHz bands in Q4.

Ishak said the average processing time for a tower approval is four-to-six months, with an average of 20 forms to complete and a fee of $2,000 per tower. The country has 150 local governments and 15 states, one of which charges $16,000 in fees per site.