Shipments in India expanded 23 per cent during the quarter, while the global smartphone market rose 5 per cent, according to Counterpoint Research. Nearly 70 per cent of the smartphones shipped were LTE models, with 80 per cent of those voice-over-LTE capable.

“While the bulk of the first-time smartphone users had Indian or Samsung smartphones, the aggressive entry and growth of Chinese brands have prompted most of these users to upgrade to affordable but better spec smartphones,” said Counterpoint analyst Pavel Naiya.

He said this has been possible because of Chinese brands adopting a direct and exclusive e-commerce channel strategy to be cost competitive.

Changes in the rankings
Samsung continued to dominate both the feature phone and smartphone segments (see chart below, click to enlarge), but its overall market share declined sequentially by 4 percentage points even though it registered a record quarter in shipment volumes in India. 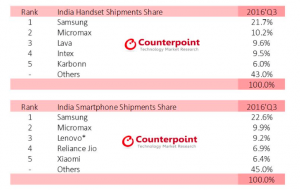 Micromax maintained the second spot in the smartphone space with a 9.9 per cent share and was followed closely by Lenovo (9.2 per cent). Reliance Jio’s LYF brand climbed to number four in the smartphone category, benefitting from the commercial launch and attractive trial period offer to consumers.

Intex slipped to fourth in the overall (feature phone and smartphone) market, and in the smartphone segment it was pushed out of the top five rankings by LYF and Xiaomi.

Xiaomi entered the top five smartphone rankings due to strong demand for its Redmi Note 3 device, which was the second best-selling smartphone during the quarter.

Lava was the fastest growing Indian brand during the quarter, with 8 per cent growth, which put it in third overall and second behind Samsung in feature phones.

The number of brands shipping more than one million smartphones in a quarter almost doubled from six brands in Q3 2015.

Feature phone shipments rose just 2 per cent year-on-year, but were up 23 per cent sequentially.