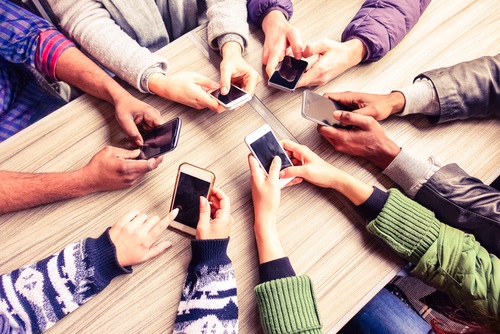 China’s smartphone market contracted in the first quarter of 2019, with shipments falling to their lowest level since 2013, data from Canalys showed.

Shipments during the quarter slipped 3 per cent year-on-year to 88 million units (see chart, below, click to enlarge). Canalys analyst Mo Jia noted the decline softened slightly, offering some relief after a tough 2018: “Major vendors are gearing up to full speed, releasing new products and spending on marketing, to maintain share in the face of competition from Huawei.” 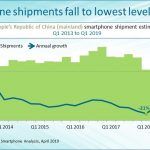 Huawei was the only vendor in the top five to buck the downward trend, growing shipments 41 per cent to 29.9 million units (including Honor devices) and increasing its market share by more than 10 per cent, ending the quarter with a 34 per cent share.

Canalys noted the vendor increased investments in retail stores to exploit its size and out-compete smaller vendors. It also moved further into rural areas and upgraded many of its shops.

“These investments have helped it gain customers from other vendors, such as Oppo and Vivo, which used to enjoy absolute dominance in offline channels over the last few years,” Jia stated.

Falling shares
Both Oppo and Vivo booked modest declines in shipments in the quarter, but maintained their number two and three positions respectively as their market shares dipped only slightly.

Apple’s shipments plunged 30 per cent year-on-year to 6.5 million, its worst decline in two years. Its market share of 7.4 per cent was almost 3 per cent lower.

Jia noted the US vendor’s Q1 performance was a concern “given that the worst quarter for iPhone shipments is usually Q2 or Q3″, though retail price cuts “has largely relieved the pressure from its channel partners”.

“Despite the iPhone’s installed base in China being well over 300 million, it is vital that Apple prevents users deserting it for Android vendors. Apple faces a challenge in China to localise its software and services offerings as quickly as in western markets. Its hardware is therefore more exposed to competition in China than elsewhere. Bringing up-to-date features, such as 5G, next year, as well as localised software is vital to prevent demand shrinking further.”