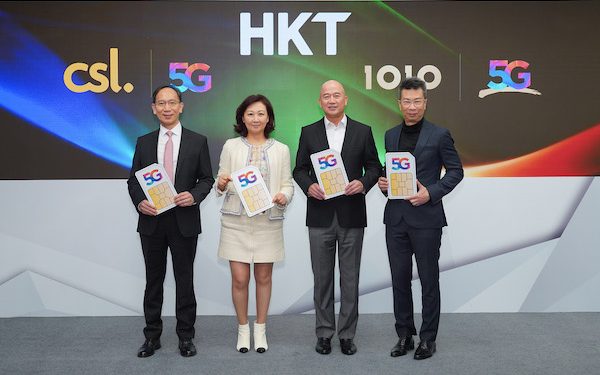 HKT detailed plans to launch 5G service in parts of Hong Kong on 1 April, which would make it the first operator in the territory to offer the next-generation technology.

In the initial phase, the operator said coverage will reach 11 of the territory’s 18 districts, including Causeway Bay, Admiralty and Central, with plans to extend to all districts and major subway lines in the coming months.

Susanna Hui, group MD at HKT (pictured, second from left), said in a statement the operator’s substantial 5G spectrum holdings and extensive fibre-backed infrastructure left it well-placed to deliver a differentiated experience. Its new base stations are connected to the core network by optical fibre, she added.

Monthly data plans start at HKD198 for 8GB of data.

Meanwhile, SmarTone, the fourth-largest operator in the territory, named Ericsson as its sole 5G equipment vendor. In March 2019, the companies started 5G field trials on the 3.5GHz and 28GHz bands.

The operator, which didn’t announce a launch date, said it will be the first operator in Hong Kong to deploy Ericsson’s spectrum sharing technology, enabling dynamic sharing of 4G and 5G frequencies.