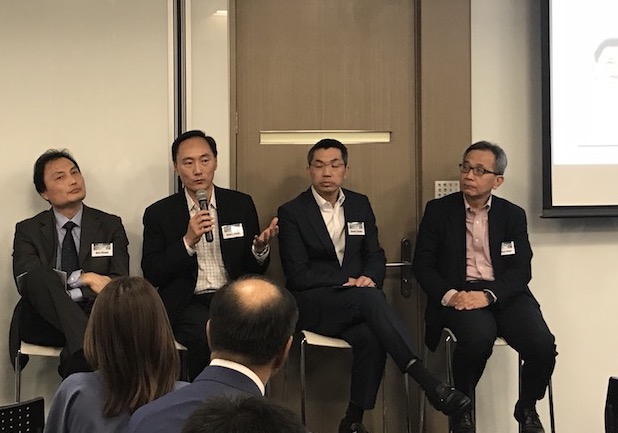 During a panel discussion with representatives from the city’s four major mobile players, Daniel Chung, CTO of 3 HK parent Hutchison Telecommunications (pictured, second from right), complained the government pricing mechanism for spectrum “is a bit too high, and we’d like to see support for paying at a more rational level” in future.

SmarTone CTO Stephen Chau (pictured, far right) branded prices as “very expensive”, adding operators won’t be able to afford the necessary spectrum to roll out 5G networks in 2019 unless there is a change from the government.

Backed by its parent, the operator is keen to launch commercial 5G services as soon as the CA releases the spectrum.

Hutchison’s Chung added the regulator must deliver “a long-term, more transparent and well managed spectrum policy so operators know how much, and when to invest. The current release plan only has a three-year outlook. We don’t have a solid five-year plan or a tentative ten-year plan we can work from”.

With operators across the world looking to transform their operations, he suggested it is “time for the government to think about doing transformation around spectrum”.

Chung argued for a longer licensing period for 5G spectrum than the current 15-year period, given the huge investments required.

5G preparations
Henry Wong, head of strategic wireless technology and core networks at HKT (pictured, second from left), highlighted operators are already preparing to launch 5G, pointing to recent trials the company conducted in the 28GHz band: “We’re doing as much as possible, but for sure it well help if we can get spectrum earlier than the government has indicated”.

For 5G to achieve its potential, HKT reckons each operator needs a minimum of 100MHz in the mid-band range, specifically the 3.5GHz band, which means the city needs 400MHz available for four operators. But the regulator plans to only release 200MHz of 3.5GHz spectrum.

“And we to need to have it available early so we can better plan our network. Timing is important. If we can have this band by early 2019, that would help Hong Kong very much,” Wong said.

Chung said its mobile unit 3 completed indoor trials on the 3.5GHz band in 2017 and will soon start outdoor tests on the band along with mmWave trials.

“Everything is in place and we’re ready to go, we’re just waiting on the network and handsets. We expect the working network to be ready at the beginning of next year and the handsets later next year. That’s what we’re aiming for. But, of course, we also depend on the support from the government on spectrum.”