Hon Hai Precision, the largest electronics contract manufacturer in the world and the main assembler of iPhones, reported its first drop in revenue in more than two decades during 2016 as sales of iPhones didn’t live up to expectations.

The Taiwan-headquartered company, better known as Foxconn, saw revenue fall 2.8 per cent to TWD4.36 trillion ($144 billion) in 2016 (see chart below, click to enlarge). A nearly 10 per cent jump in sales in December couldn’t offset seven months of revenue declines, which started with a 15 per cent drop in turnover in January. 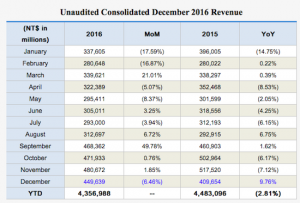 With Apple’s fortunes improving over the past two quarters, Foxconn’s profitability spiked in Q4, jumping 30 per cent year-on-year to TWD68.8 billion, despite revenue dropping 1.8 per cent to TWD1.4 trillion during the quarter, the Review reported.

Foxconn saw 2 per cent and 3 per cent revenue gains in January and February 2017 respectively.

After three quarters of falling sales, Apple’s iPhone product line returned to growth in Q4 2016 (the vendor’s fiscal Q1 2017). The company shifted 78.3 million iPhones during the quarter, an increase of 5 per cent year-on-year, which was accompanied by a 5 per cent increase in iPhone revenue to $54.4 billion.

Apple said in late January the iPhone 7 was its most popular model and it saw “especially strong demand” for the larger (and more expensive) iPhone 7, which of course is good news for Foxconn.